July 20, 1972: A sidelight on the Aboriginal Tent Embassy in Canberra. 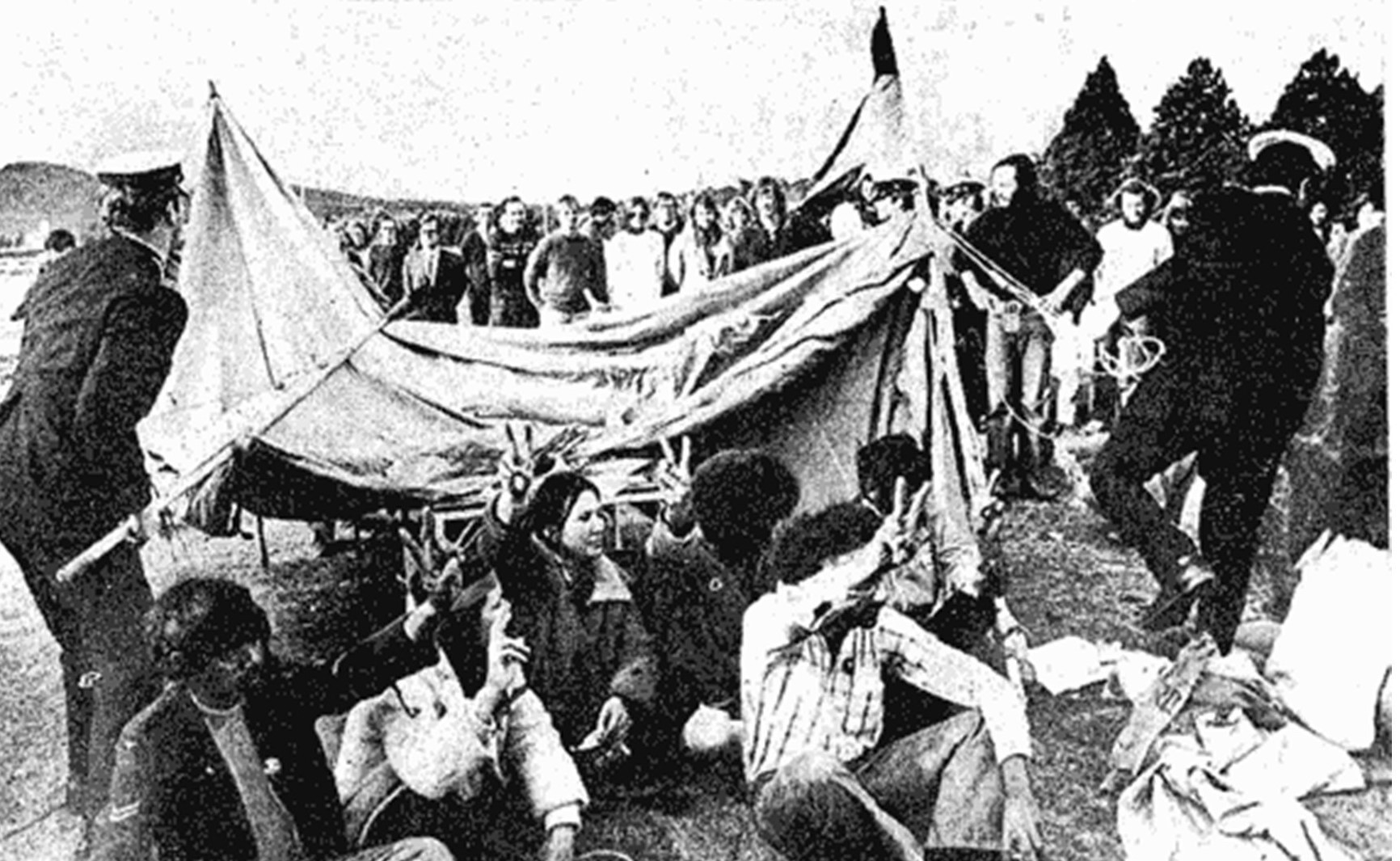 The 10 o’clock Thursday lecture on twentieth-century Australian History had barely begun when one of my students, Steve Padgem, burst into the Hayden-Allen tank shouting: ‘The cops are pulling down the tent embassy! We need help to stop them!’

The class moved from thinking back on what had happened in this country, into playing our small part in shaping its future.

Public servants returned to their offices while full-time undergraduates sorted out who could drive whom. On our way out of the building we bumped into another stuff member, Bruce Kent, who joined us and took a carload of students.
No one thought it odd that a university lecture should break up to support the Aborigines against the government. Two years earlier, the Vietnam Moratoria had closed down entire campuses in answer to the trade union movement’s call: ‘Stop Work to Stop the War.’
The Students Union provided a base for Embassy residents, somewhere to eat, to shower and to get medical support. The VW Beetle of a history lecturer on study leave became the Embassy’s diplomatic vehicle.
In those days, the embassy comprised a couple of small tents, nothing like the buildings and marquees today. Pulling it down should have taken the police no more than a couple of minutes. Yet they had not moved in. The press was turned out in full and a photographer had darted across the National Library to document the event.
The luck of having Bruce Kent along came to the fore. Bruce at been a Rugby Blue. He suggested that we arrange ourselves around and over a two-person tent like the two sides of a scrum. Interlocking bodies would be a more effective barrier than just linking arms.
And so it proved when the police got instructions to get it over with. Not that we lasted long against them. At the end of the melee, I found myself pulling a thin tent pole in one direction while a sergeant tugged it away. As we stared at each other, I got the sense that his heart wasn’t in it.
There had been six arrests but no thuggery.
Four days later, on Sunday 23rd, the confrontation could not have been more different. The Embassy residents had decided to re-erect the tents. The McMahon government responded by calling support from a couple of hundred NSW wallopers. Protestors ended up at hospital. The bruised and battered gathered that evening at the Students Union. Their trauma is caught in the documentary, Ningla A-Na! now available on SBS On Demand.
A week later, the balance of forces had shifted again. Busloads of unionists and Aborigines arrived from Sydney and Melbourne. Canberrans turned out in their hundreds to swell the march across Commonwealth Avenue Bridge. The tents went up again, though everyone realised that this was an act of defiance, not a ninety-nine year lease.
Needless to say, McMahon lost the courage of his own lack of conviction. He had been pressured into agreeing to removing the illegal eyesore by the National Party’s Minister for the Interior, Ralph Hunt. Frightened by the backlash, McMahon now listened to Nugget Coombs and invited Embassy representatives to a discussion at Parliament House.
The prime minister opened proceedings by telling how privileged they were to be around the Cabinet table. At which, the Aboriginals got up and sat on the floor.
See Gary Foley, Andrea Schaap and Edwina Howell (eds), The Aboriginal Tent Embassy (2014).
Humphrey McQueen. A wide selection of his writings are downloadable from www.suplusvalue.org.au