Smash this system to the ground it’s built on 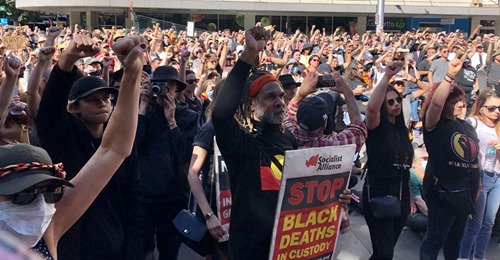 An ex-BLF mate Lennie texted on the night of Prince Philip’s death, “$14 million a year to walk around with his hands behind his back. Are you serious?

Yet Lennie is more than a wit. Until her death in 2009, Lennie supported Letty Scott’s fight for justice for her husband Douglas, murdered in Darwin’s Berrimah Prison in 1985. Douglas Scott told Letty he was afraid for his life, because the screws said they were going to kill him.

An inmate said he heard Douglas crying out and bashing sounds from his cell the night he was hanged.

Letty’s unceasing effort and support group, including US First Nations who funded her 25- year struggle, and a foreign forensics expert in torture victims who took on her case, mean we know more details about Douglas Scott, his life and untimely death.

Five more in one month

In contrast, the ABC cut scheduled broadcasts to grovel before the throne, tugging heart strings with Philip’s ‘great humanity’, ‘service’, ‘partnership of the era’ and ‘environmentalism’ (so ‘heartfelt’ he left it to the world’s children to protest).

But five Aboriginal deaths in custody in one month? A royal parasite’s death trumps these human tragedies.

At Saturday’s Sydney rally marking thirty years since the Royal Commission into Aboriginal Deaths in Custody brought down its much-ignored recommendations, speakers repeatedly commented on the lack of human stories to mark these five deaths, and the 470 more, compared with the outpouring for the prince.

In acknowledging Country the day after the prince died, Uncle Dave Bell named each of the many Peoples across the state, because not one clan or family has been untouched.

The rage of Meyne Wyatt, whose father was nearly bashed to death by police in Kalgoorlie, shook the crowd. “I’m fucking sick of it! We have been saying it time and time again, but nothing happens!”

Then he said, “Put your fists in the air. Turn around. Look at the people around you. Look how many fists are in the air.

“Look at the person next to you. Keep them safe. Because the Indigenous brothers and sisters might not be able to go home tonight.

“You see the boys in blue are all out here? Any other rally I’ve gone to, I don’t see them. They’re here because we are Aboriginal Peoples. I want them to know whose land this is.

“Always was. Always will be…” to the crowd’s roar “Aboriginal Land!”

Actor and artist Meyne Wyatt spoke, like Gary Foley has for years, about those of his Peoples who have been silenced or bought off.

But hidden from most eyes are the multinational corporations doing the silencing and the buying.

Prince Philip’s wife was exposed decades ago as the biggest shareholder in mining company CRA,  which in 1997 merged to form Rio Tinto. While big on throwing a few bucks around to chosen First People, Jukkan Gorge shows just where Rio Tinto’s truth lies.

Through the Business Council of Australia, giant corporations like Rio Tinto set out a systematic plan to divide and conquer First Peoples after the overwhelming and dangerous unity of 1988.

Since the 2017 publication of ‘Driving Disunity: The Business Council against Aboriginal Community’ outlined the machinery of this plan, its implementation has flooded the invaders’ stolen lands. (‘Driving Disunity’ is free to download from Spirit of Eureka’s home page )

These days ownership is hidden in new laws, red tape and in nominee companies that even anti-corporate crusaders like Michael West sometimes find almost impossible to unravel.

Lidia Thorpe has these new look invaders in her sights.

Recently, she demanded answers from smug federal parliamentary officials, about why millions of dollars meant for First Peoples have been used to subsidise multinational tax avoiders like ConocoPhillips. “Aren’t they rich enough to employ a few of our people?” she demanded.

These corporations, well organised inheritors of invasion, are the real rulers of Australia. The whole imperialist system runs for them.

The colonials have not changed

Paul Silva reminded us that the death of his uncle, David Dungay will not be investigated by criminal or workplace safety processes in this corrupt system.

No colonialist legal avenues, including an inquest, have brought more than a slight nod to truth.

“They know the governments will allow them to get away with killing and murdering of Blak Peoples in custody.

“They was promoted three weeks after the death of David Dungay,” Paul Silva said of the prison guards who suffocated David Dungay.

“That’s why we’ve been fighting for the last five years.

“The death in custody doesn’t just impact on the individual family. It affects every Aboriginal person.

"Justice", he said, “won’t happen till we smash this system to the ground it’s built on!”

Aunty Gwenda Stanley from FISTT warned, “The colonials have not changed... The major political parties don’t give a damn about us.

“But let me tell you. We are the custodians of these lands, and we’ve always had their number!”