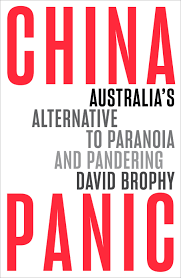 The release of David Brophy’s book on the developing paranoia about China’s interference in Australia comes at a time when the very thing about which he is complaining featured for over a fortnight in the US and Australian media.

On June 4 (a coincidental date?), a tweet in the US claimed that the US had a senior defector from China who had Covid-19 “Wuhan info”.

Over the next couple of days, the “defector” was identified as China’s vice-Minister of State Security Dong Jingwei, who had provided the Biden administration with “proof” that the virus had been man-made at the Wuhan Institute of Virology in a program managed by the People’s Liberation Army.

This locally-transmitted case of disinformation remained live until June 22, when it was admitted to have been a lie.

The claim was all too reminiscent of the claims made by another “defector”, Wang Liqiang, who claimed in 2019 to have explosive inside information on Chinese interference in Australia, Hong Kong and Taiwan.  Wang was a fraudster and no-one now takes his claims seriously, but at the time, his story was widely believed, or portrayed as credible, in the mainstream media and anti-Chinese political circles.

We do not agree with everything in Brophy’s book. Nor would he endorse our view of China, that it is a country that committed itself to the expansion and restoration of capitalism through the reforms that began with the era of Deng Xiaoping, and that its challenge to US domination is not that of an anti-imperialism based on real Marxism-Leninism and the theories of Mao Zedong, but of a rival for the capture of resources and markets, to be exploited for the profit of a Chinese capitalist class.

Brophy is not a communist, and his views do no stand or fall according to how they align with our own. He is a specialist on the Uyghur nationality and supports the “democracy movement” in Hong Kong.

The value of Brophy’s book lies in its uncompromising criticism of Australia’s security laws and the current obsession with “foreign interference”. He says on p. 210, that ASIO “simply cannot be seen as an ally in the defence of democratic rights.”

As an example of the threats to our democratic rights that have arisen from the panic over China’s influence in Australia, he cites the Espionage and Foreign Interference Bill 2017.  He writes (p. 111) that “conduct that may ‘advantage the national security of a foreign country’ (for example, by opposing a war against it) is also criminalised.”

Brophy does not just blame the usual suspects in the feral media (Andrew Bolt, Sky News) or the Liberal Party (Andrew Hastie, Eric Abetz et al). He quite correctly points to the pro-US cartel in the Labor Party for their contributions to the panic, reminding us that “in July 2016, when the UNCLOS tribunal in The Hague decided that China’s artificial islands in the South China Seas were not land features...right-wing defence spokesperson Stephen Conroy went off-message by urging Australia to follow the United States in carrying out ‘freedom of navigation exercises’. Speaking from Washington, where he was on a paid trip for a meeting of the Australian American Leadership Dialogue, Conroy criticised the Liberals for their reluctance to authorise the Australian Navy and Air Force to enter the twelve-nautical-mile zone around Chinese-claimed reefs and islands” (p. 108).

He is scathing about the real threat to Australia’s sovereignty from the US military alliance. Writing with particular reference to US intelligence and military facilities here, he says “This state of affairs represents a serious compromise of Australia’s sovereignty, one far more serious than anything China is said to have been responsible for in recent times” (p. 77). A few pages on (p. 92), he writes that “American military hardware and intelligence facilities on Australian soil, along with Australian ships and fighter jets embedded in US command structures across the Pacific, all but take the question that is most basic to any society- whether or not to go to war – out of Australian hands.” And he is certainly not wrong to raise the question of whose sovereignty is being continually referenced: “Indigenous sovereignty, as activists remind us, was never ceded. Whose sovereignty is at stake, then when we rush to defend ‘Australian sovereignty’ in the face of China? As an external enemy par excellence, China normalises White Australia’s claim to this land, and voids that of Indigenous Australians” (p. 195).

If there is any weakness in his references to sovereignty, it is his confusion over the call for a more independent Australia.  He agrees that the country is best defined as “sub-imperial”, describing Australia on p. 85 as a “great power writ small, whose ability to act in such a way, is enabled by, indeed dependent on, its relationship with an actual great power. “Sub-imperial” is the term some use to describe this situation. A sub-imperial Australia effectively asks America to underwrite its ambitions for its own mini-empire, which extends well beyond the boundaries of the island continent and into the Pacific.”

Here Brophy ignores the objective of a genuinely anti-imperialist independence, and confuses independence with the exercise of those limited options for regional power and influence allowed to the Australian ruling class by the power that controls the Australian state and economic lifelines – US imperialism. He is on much firmer ground when he says on p. 221 that “Australians should tell America that we are not interested in participating in a new cold war or providing a platform for one. We should do so not with apologies or regret, but fully conscious of the way the American alliance has implicated Australia in war crimes and violations of international law, and will risk doing so again for as long as it lasts.”

It is unlikely that Brophy’s book will garner the media interest that made Clive Hamilton’s Silent Invasion so influential back in 2018. The two works are polar opposites and it is in the interests of the US overlords to make Brophy’s work disappear.

Seek it out at your local library – it’s worth the read.