Unprecedented national link up demands the end of the NT Intervention 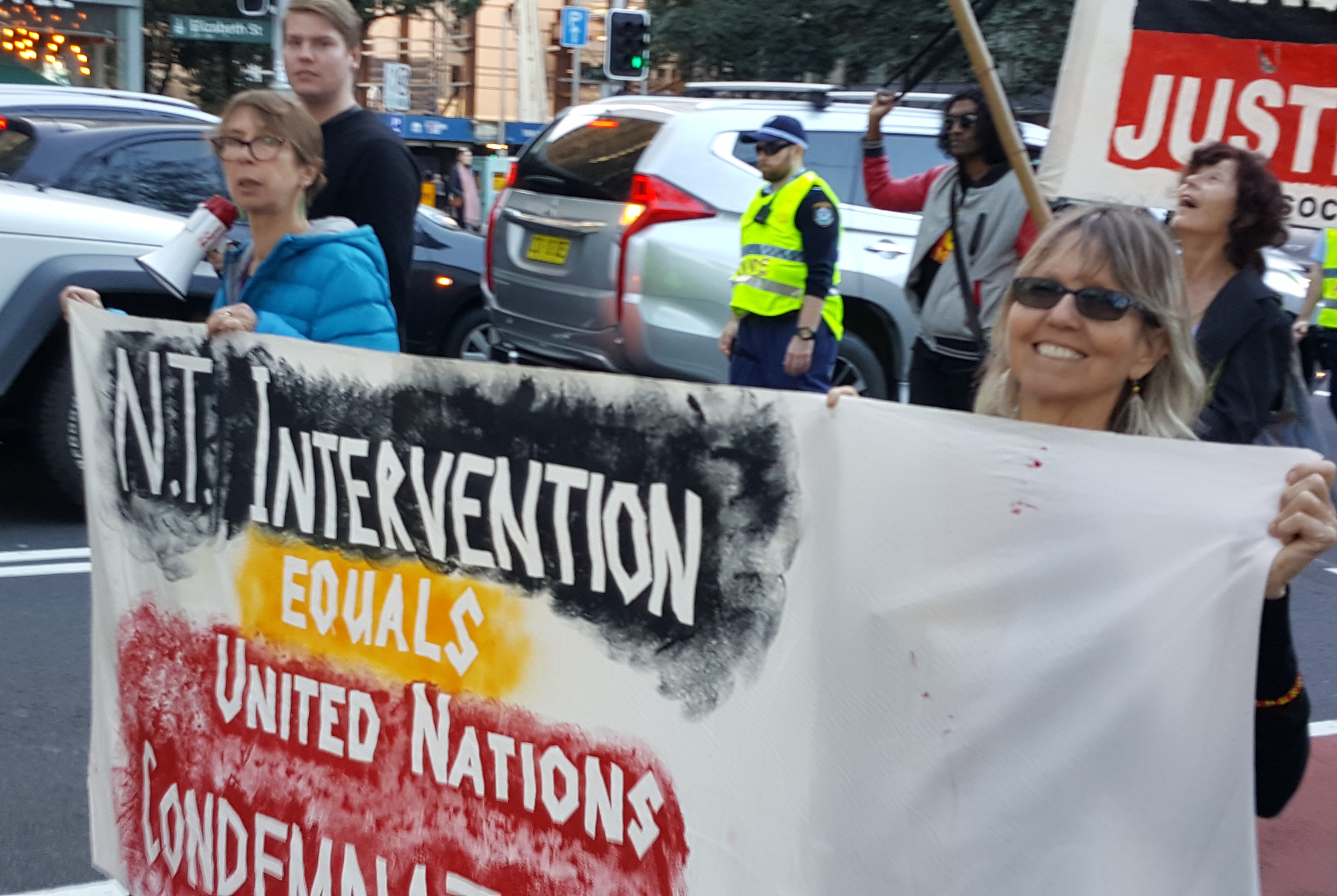 Aunty Cathy (in foreground at 2018 Sydney rally) introduced the conference

The homelands of Utopia, hundreds of kilometres northeast of Mparntwe (Alice Springs), used to be one of the healthiest communities in Australia, black or white, says Arrernte woman now resident in Melbourne, Celeste Liddle.

In 2007 the “Emergency” Intervention brought invading troops and police into First Peoples’ communities across the NT, including Utopia.

Utopia lost its water supply, allowing disease to spread, after the Intervention’s white-run Barkly Shire Council replaced Urapuntja Aboriginal Corporation and broke a bore. It took crowdfunding to shame the NT Government into fixing it. Urapuntja had successfully managed community services for over three decades before the Intervention stripped it and all other self-determining NT Aboriginal organisations of their power.

In Utopia, Elder Rosalie Kunoth Monks and her daughter Ngarla, outspoken from the first day, had to explain to Elders what pornography was.

“Our kids fear… It’s a bleak future for them,” she says.

Based on a lie

Anger is still palpable about the lie on which the Intervention land and resource grab was based. ABC’s 2007 Lateline reporter Tony Jones made no attempt to scratch the surface of allegations that Elders led paedophile rings in communities.

A so-called long term NT youth worker, Greg Andrews, the allegations’ source, was soon exposed as working for Minister Mal Brough’s office. He had never been a Territory youth worker or worked in communities. Andrews is now High Commissioner to Ghana.

“When we found out it was a lie, it should have been disbanded then!” says Aunty June Mills, a Larrakia musician, artist and Elder of great renown, who recently featured in ‘Ernie Dingo’s Going Places’.

Neither Tony Jones nor the ABC apologised. Jones was promoted.

Amelia Kunoth Monks and Celeste Liddle, a writer, unionist and now Greens candidate for the upcoming federal election, were two of 17 speakers at a ground breaking online conference over two days, marking the Intervention’s 14th anniversary on June 21.

Some spoke of the Intervention as assimilation rebadged.

Emeritus Professor of Economics and Anthropology Jon Altman states, “The intervention sought to revisit and amplify an earlier colonial attempt by the Commonwealth from the 1950s to assimilate Indigenous peoples, some then still living at or even beyond the frontier, speaking Aboriginal languages, largely adhering to their own laws, customs, beliefs and values. Government policy looked to reform those with tradition-influenced ways of living into compliant mainstream subjects.”

Such “reform” was and remains deceitful and violent. Altman says the Intervention deploys “constitutional powers, as well as fiscal and military might.”
Many people are enslaved in the Community Development Program (CDP). Jon Altman slams the 500,000 CDP penalties suspending payments since 2015.

A Lardil man who has long resided in the Territory, Mr Hodder Watt was particularly enraged when recalling the threat of sexual medical tests on all children, eventually defeated by refusal of families like his and by doctors to allow them to proceed.

Meanwhile, Aunty June tells the conference that she is being evicted from public housing. The first time she was contacted was when a court notice was served. It’s daily life these days.

It bans ANY Commonwealth funding for housing in 500 homelands. Most houses are 30 to 40 years old, and have had zero maintenance since 2007. Between 2018 and 2023 NO money is budgeted for homelands, despite their indisputable success in improving the lives of First Peoples.

“Undermining traditional custodians, there is no mention of housing,” Professor Marks says, “instead a new statutory body gives crumbs for art centres.”

Tellingly, he is investigating “international Crimes Against Humanity and Genocide, and the potential relevance of the development and jurisprudence of these international laws to the Australian context.”

Instead of bringing small numbers of speakers from communities, where they have obligations and needs to survive, to far away Sydney and Melbourne for small forums and yearly anniversary rallies, these strong women and men, mostly First Peoples, but also committed allies, have united online.

The conference’s strength is enough to ensure that some mainstream media will share the truth widely.

More importantly, it concentrates knowledge of the Intervention’s colonialist aims and methods. It helps crystallise the way forward.