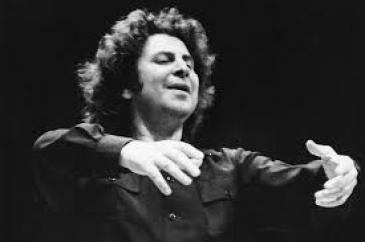 Who can resist the stirring sound of the bouzouki played on a deserted Cretan beach as two men dance the sirtaki in a state of Dionysian ecstasy? Or the powerful voice of Greek singer Maria Farandouri singing about Mauthausen concentration camp to music of profound melancholy. Or indeed, the pounding insistence of the musical scores of films like Z and Serpico? Those who have been moved by these sights and sounds owe their experience to the great Greek musician Mikis Theodorakis who has died aged 96. Vale Comrade Theodorakis.We reprint below a statement by the Communist Party of Greece (Marxist-Leninist):

Mikis Theodorakis, who lived for nearly a century, breathed his last on Thursday 2 September at the age of 96.

A century full of struggles, wars, proud victories and unbearable defeats for our people, who attempted the most important steps so far for their emancipation and liberation from the formal and actual conquerors and their local collaborators. The music of Theodorakis accompanied this heroic march for decades. The music that made the great poets of this land the property of the masses. The music that accompanied the people in joys and sorrows, in revelry and lawlessness, in clenched fists, in frustration, but also in determination. A musical work that expanded into different genres, but also created new ones, thus bringing closer to the people an artistic creation that until then had been the privilege of the few.

And so, just as the people came to the political stage through their struggles, so too, through these struggles, they gave inspiration to the great artists they gave birth to, so that they could now come to the stage of art. His own art, which now overshadowed the art of his opponents or forced them to adapt to the new circumstances. Theodorakis' contribution to this process was decisive. And it was this contribution that established him in the hearts and consciences of the people as their own great musician, the intellectual man with international prestige who stood by their side.

It is no coincidence that his musical creation ceased to be the same when the popular movement and the Left retreated, especially after the upheavals of '89-91, when capitalism celebrated its formal victory over its mortal enemy, the communist movement. The wake of the storm that shook the world also reached our country, its Left and its artists.

The system did not miss the opportunity to try to appropriate a symbol of the Left and the popular movement. And thus created its own Theodorakis, the one that the government and the channels and all the descendants of those who imprisoned him, tortured him and banned his songs are mourning today.

The latter did not honour the former. "Karamanlis or tanks" in '74, ministerial appointment with the New Democracy Party in '90, participation in the nationalist rallies, recently... Theodorakis' political course upset, confused and angered the people, who, however, continued to sing his songs and pass them on to future generations as a legacy of their own, hiding the hope that one day the bells would ring again...

And when this happens, the very struggle of the people will give birth to new poets and musicians, who will fill new notebooks and pentagrams with new songs to accompany the clenched fists, along with the old ones.