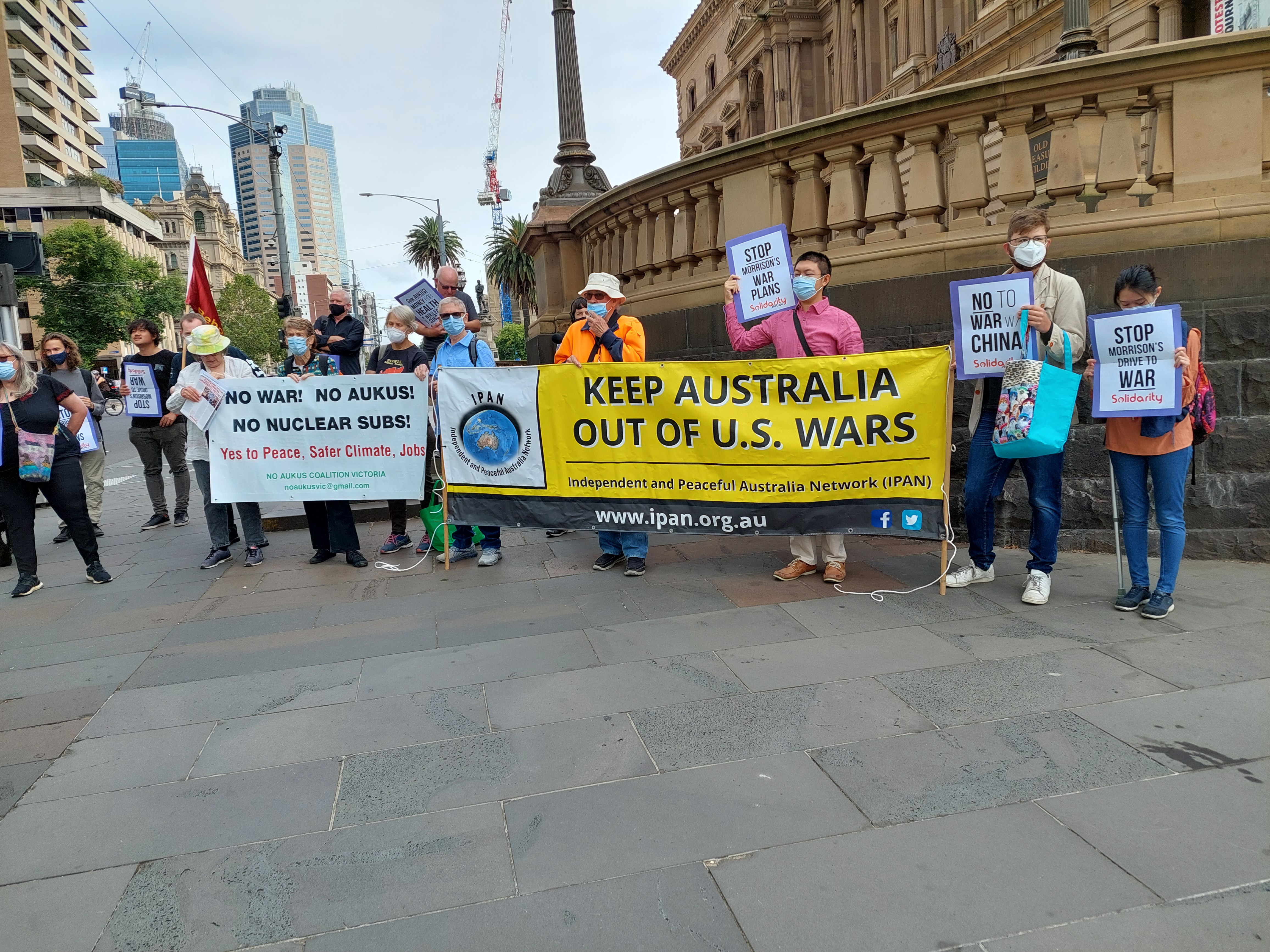 There’s a saying; "Lifting a rock only to drop it on one’s feet". This is exactly what the US-created AUKUS (Australia, UK and US) and the QUAD (US, JAPAN, India, Australia) are unleashing in Australia and the Asia-Pacific region - reigniting the people’s anti-war movement. Still in its early stages, the people’s movement opposing war preparations, is gathering momentum across the country.

The US/NATO and Russian military build-up around Ukraine has brought closer to home the reality of possible war in our own region.

The US Pivot into Asia-Pacific announced in Australia jointly by the Obama administration and Julia Gillard’s Labor government in 2011 set a new high ground for expanding US imperialism in the region.  The announcement in September 2021 of the AUKUS military pact has given more impetus to the growing anti-war movement opposing the successive Australian governments’ servile compliance with US demands to protect the US sphere of influence in the Asia Pacific in its competition with China.  Australia is now deeply integrated into the military-industrial complex, buying and trading in weapons for monopoly weapons corporations.

Anti-war and peace organisations and groups are springing up. Many spontaneously initiated petitions are circulating around the country calling for peace, ending the US-Australia military alliance, removing Australia from AUKUS and the QUAD, calling on the government to direct people’s taxes to public health, education and the environment, not to wars of aggression.  Numerous on-line zoom meetings and webinars have been held over the past 2 years discussing Australia’s involvement in US-led wars, the US-Australia alliance, military spending and the global proliferation of weapons and militarism.  Recently, a national coalition of many organisations and individuals across the country, united in their opposition to AUKUS, has been formed and is in early stages of development.

Blinken not welcome in Melbourne 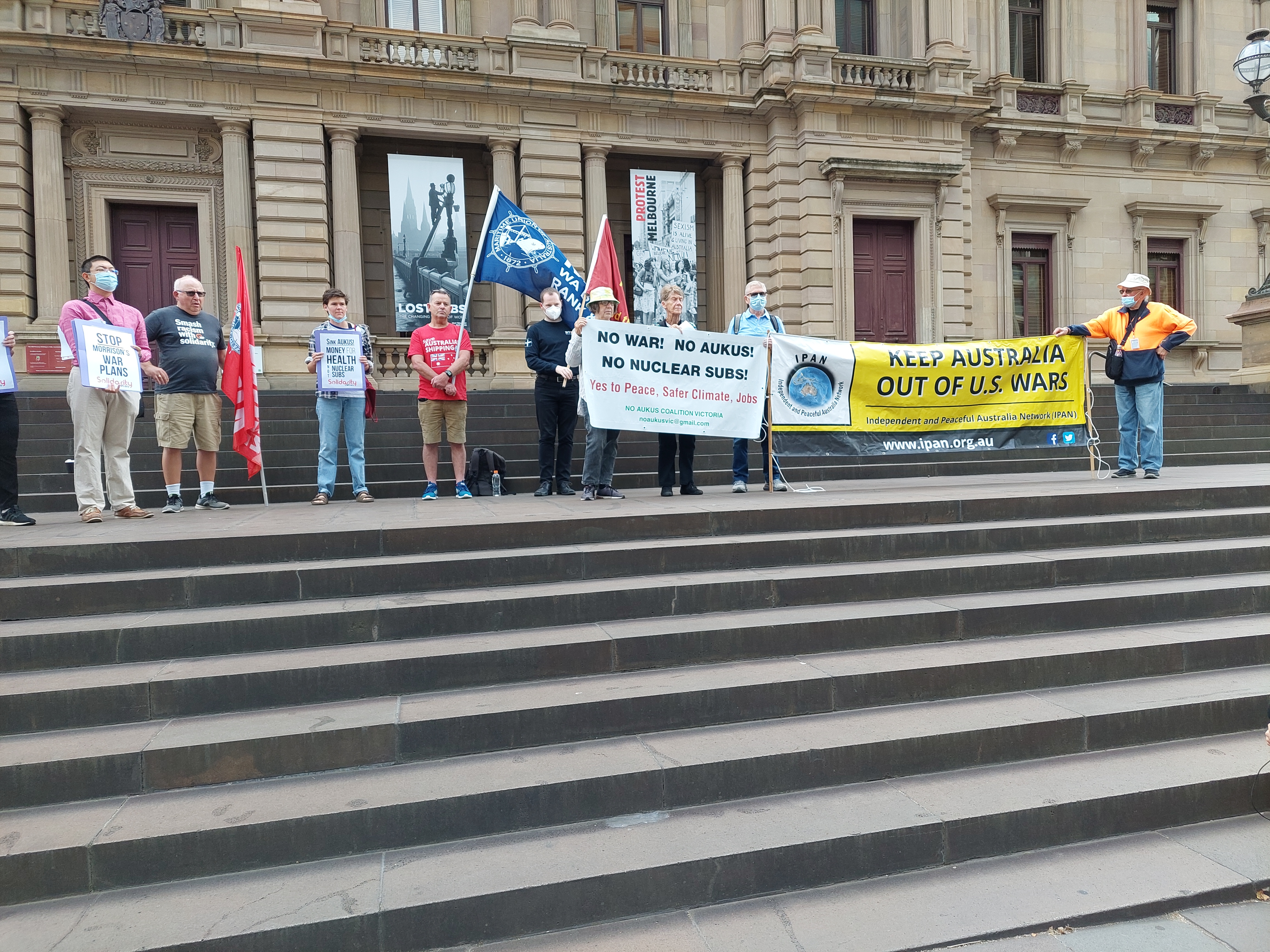 A quickly organised protest rally was held on Thursday 10 February near the meeting venue of QUAD Foreign Ministers in Melbourne.  This was the first meeting of the revamped QUAD, led by US Secretary of State Antony Blinken and joined by the Foreign Ministers of Japan, India and Australia. The QUAD is designed to strengthen the US economic control in Asia-Pacific and tie the other 3 countries closer to US political interests in the region.

As Blinken and other foreign ministers arrived in their bullet-proof car cavalcade they were met with boos and loud chants Money for Health not for War! Go home Warmongers!   Speakers included the MUA Assistant State Secretary, Victoria, Australian Conservation Council,  Spirit of Eureka, Independent and Peaceful Australia,  Solidarity and CICD.

A representative from IPAN and Spirit of Eureka told the gathering: “The Morrison-Dutton government takes its orders from Washington and the US military-industrial complex.  It shows the urgency with which the US is shoring up support for its economic and military dominance in the region.
Hasn’t our government learned lessons from the disastrous 20 year US-led war on the people of Afghanistan?  Less than 6 months after withdrawing from Afghanistan we are being prepared to plunge into another US-led war, this time with China.  As always, our obsequious government is in lock step with the US war mongers.

QUAD and AUKUS sends a warning to people of Australia and Asia-Pacific that preparations for war with China are well underway. The US economic hegemony in this region and the world is being challenged by China’s economic rise and its own economic ambitions.

The twin of QUAD is AUKUS – Australia, UK, and US military pact – instigated and led also by the US.

The AUKUS military pact will syphon off hundreds of billions of dollars from needs of the people in health, education, social services, aged care, environment and urgent action to mitigate climate change.   This is at a time of serious Covid epidemic, of our overworked and exhausted health workers, understaffed and underequipped public hospitals, understaffed and underfunded aged care facilities, shortages of rapid antigen tests.  We are in a major health crisis and yet we’re spending billions on imperialist wars that benefit only the big corporations and the military industrial complex who reap huge profits from wars and military build ups in preparations for wars.

We hear the constant government and opposition’s mantra that AUKUS and QUAD are necessary for the security of this country.  Well, we say it is not security and health of people and the environment that these profiteers have in mind.  What they really mean is the security and increase of profits for US and European weapons corporations, and other corporations, and protecting the US global economic, political and military hegemony."

A representative from the Australian Conservation Foundation made a powerful speech: "We have a key role to remind us of and highlight the human, cultural, environmental and economic costs of war and preparations for war.

It is not five months since PM Morrison suddenly surfaced with the surprise announcement of AUKUS.

A massive spend - locked in military inter-operability and relations - a profound loss of national sovereignty and the ability for Australia to independently position - the environmental risk of nuclear subs and the Trojan Horse this provides for those pushing a domestic nuclear industry.

At the time of the AUKUS announcement the head of the Australian Navy - Vice Admiral Michael Noonan - described this as a decision that “will no doubt change the shape of our nation”.

Those are high stakes - and we want a say.

It will be of little surprise to see the military and political drivers and beneficiaries of these massive new defence spends.This is just one example of the push for ever expanded militarisation and we need to challenge this increasing military spending and posturing.

Today on Planet earth we face a real crisis.
The Doomsday Clock - which measures humanity’s proximity to oblivion - is currently set at 100 seconds to midnight - as close at it has ever been.
This is because of the twin existential threats of unchecked climate change and nuclear weapons - and we urgently need to address, not worsen, both.

The economic cost of militarisation is enormous. Imagine the real human and environmental needs that could be met with even one such spend - the $100 billion nuclear subs plan.

Covid and the climate crisis have shown us how connected, precarious and dependent our world is. Today millions of Australians will buy Chinese goods in the supermarket and watch the Beijing Olympics. People do not want war with China. We need to build bridges, not arms.

Covid and the climate crisis also offer some clear lessons on the need for collective and shared responses in the global good - not in the isolated interest.
15 years ago here in Melbourne - in fact just up the road - ICAN was launched. It has gone on to grow global support for a ban on nuclear weapons.
This is the sort of role Australia can and should play - building a justice based peace, not preparing for a nuclear war.

It is not ok that the Prime Minister can chat with Minister Dutton and commit Australia to war - there needs to be real checks and balances and war powers reform.

Thanks for being here today and for all your efforts to push for debate, scrutiny, evidence and sanity. If our country is being shaped then we can and must do better shaping than the current ever increasing war fighting preparation and posturing. And - unlike war - peace won’t cost the Earth."

On February 15, the No Nuclear Subs SA held a rally outside the Adelaide Convention Centre where an AUKUS business lunch was being held. It was supported by IPAN, ICAN, Solidarity, Socialist Alliance and Socialist Alternative. As representatives of the masters of war, like Raytheon, arrived, they were greeted with chants of “Jobs Yes, Weapons No – AUKUS has got to go!”

Competing imperialist camps threaten imperialist war
Imperialism has divided the entire world between western imperialist powers, with the US the biggest and most powerful and belligerent imperialist power.  The economic rise of China is challenging US global hegemony.  A former socialist country, the Chinese government has embraced capitalism. To survive as a capitalist power China is compelled to expand and export its capital and invest in other countries for profit making.  The Belt and Road is one of China’s economic tools for the export of capital and expansion of its spheres of influence necessary for the creation of surplus value.

The military build-up and tensions over Ukraine reveal the intensified geo-political competition between the US and Russia.  Russia as a capitalist power also has its own ambitions for defending and expanding its influence and power in the former Soviet Republics.  The rest of the capitalist world comprising smaller and economically less powerful nations are compelled to ally themselves with one or the other superpower.

AUKUS and the QUAD are revamped US military and economic pacts and alliances cobbled together to challenge China’s rising economic power and influence.  A NATO version in the Asia-Pacific. The US and UK chants for their “international rules based order” are simply to uphold the US-led western imperialists’ power and control of the world and their spheres of influence. China and Russia want to change this “international rules based order” for their own economic interests.

War and imperialism are inseparable.  War is the heightened period of acute imperialist competition.  Capitalism is compelled to constantly expand; imperialism is the highest stage of capitalism with the redivision of the world’s resources, constant trade wars and ever present wars and preparation for wars.  Since the end of WW 2 a majority of the world’s resources and markets have been dominated by western imperialist powers.  Mainly the US, but also the remnants of the old colonial powers of Britain, Germany and France.  China is now challenging this global domination.  The Belt and Road is viewed by the western imperialist powers as threatening their hegemony.

The US is desperate to protect and expand its global imperialist supremacy against China and Russia, its economic rivals. It is the US and other declining former imperialist powers (UK, Germany, France), dependent on US imperialism, who are ramping up military forces and threatening a world war.

Two distinct camps are forming. In the imperialist camp are divisions and competing interests and rivalries for spheres of influence and control of global resources and markets.  Divisions between the US and other European members of NATO have opened up over Ukraine.  As a QUAD member, India refused to be drawn into conflict over Ukraine.  Imperialist powers advance their own interests and ambitions for economic control.

On the other side are broad local and global people’s formations, alliances and popular opposition to war.  A united front resisting and pushing back imperialist war plans, demanding peace, economic security, justice for working people, climate action and independence from superpowers.  The basic things capitalism can never deliver.