NSW Teachers Fight for More Than Thanks 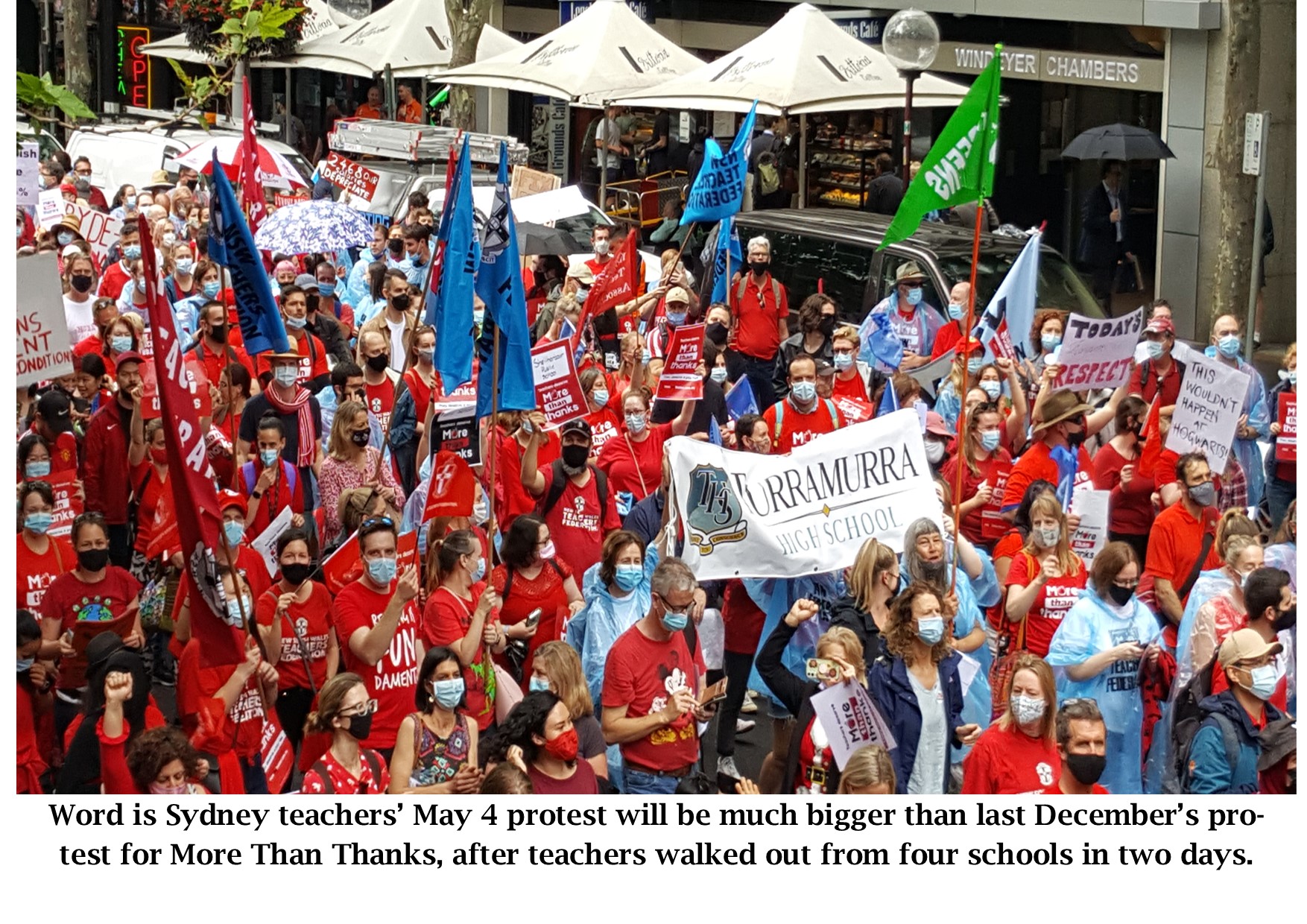 New South Wales public school teachers will take 24-hour strike action on 4 May after a term of unprecedented difficulty in schools. This is the second 24-hour state-wide strike in six months by NSW Teachers Federation members and comes amidst a wave of industrial action by NSW public sector workers fed up with a legislated 2.5% wage cap that has frozen wages for a decade. Current CPI of 5.1% means wages are not close to keeping up with the cost of living. Workers are also up in arms about a variety of unacceptable conditions in their various industries.

For teachers, the 4 May strike is the latest action in the Teachers Federation More Than Thanks campaign, which seeks to win real improvements to teachers’ conditions and pay and also ensure the continued viability and health of the NSW public education system.

The flatlining of teacher salaries over the last decade has not only meant that teachers are falling behind inflation, but it also means that new teachers are not joining the teaching service in the numbers that they previously did. That combined, with the ever-increasing workload burden imposed over the same period – a workload that has increasingly taken teachers away from actual teaching and the classroom and into burdensome administrative tasks and data collection – has led countless teachers to leave teaching, and discouraged many from becoming teachers in the first place.

NSW public education is in crisis. There are over 2,300 unfilled permanent teacher vacancies in the state and a devastating shortage of casual teachers to relieve for permanent teachers ill or on other forms of leave. This is a long-term systemic crisis that the NSW government has allowed to occur and has only been made worse by (but not caused by) the current pandemic. Last term virtually every single school in the state faced serious shortages of staff, with classes having to be merged because not enough teachers were available to cover classes. Sometimes up to seven classes were being merged to be supervised in school halls or school playgrounds. Some schools even had to go back to remote learning at home for some year groups because of lack of available teachers.

The situation in public schools in NSW has never been so dire.

This is not a sustainable situation, and it is not one in which quality teaching and learning is possible to continue. These conditions are intolerable for teachers to work under or for students to learn in. The government must be held to account.

The demands of the More Than Thanks campaign seek to address not only the rising cost of inflation but also to attract and retain new teachers for our public education system. It also seeks to push back against the rising tide of workload teachers have struggled with over the last decade. The demands are for a two-year Award with a 7.5% increase each year and a two hour increase in time allocated for lesson preparation. Incredibly, NSW primary school teachers have not had a change, let alone an increase, to their preparation time since the 1980s and, for high school teachers, it was the 1950s. The nature of teaching has changed dramatically over recent decades and teachers need more time to prepare for an ever increasingly complex job. They need to time to teach.

The NSW public school teachers Award was due to expire at the end of 2021. With the dispute ongoing, an extension of the current Award was granted early this year. The NSW Department of Education has applied for a new Award which will be heard in the NSW Industrial Relations Commission in May. They are seeking a three-year Award which will grant a yearly increase of 2.04% - well under current inflation and therefore a pay cut in real terms. And they are offering nothing on workload, and nothing to fix the dire teaching shortage.

As part of the ongoing campaign, the union has also called on teachers to refuse to implement any new policies and to walk out anytime a government MP visits a public school. This has already started, with teachers walking out on NSW Premier Dominic Perrott and Education Minister Sarah Mitchell at Marsden High School on 27 April and again on the Education Minister at Concord High school on the same day. Further walkouts occurred within days, at Porters Creek Public School and Canley Vale High School.

The fight is on!

Teachers and other public sector workers realise that the only way to win is to stand together and take collective action. Bus drivers, nurses and rail workers have all taken action recently and know it is only through more powerful industrial action that the unjust wages cap will be smashed, and their conditions improved.

The coming Federal election results won’t make a difference, and neither will those at the coming NSW state elections next year, even if the ALP gets in. The Labor Party have proven time and time again that they are just as dedicated as the Liberals to running the show for big business rather than us workers. So, we shouldn’t expect any improvements to the deal with inflation, stagnating wages and worsening conditions without us workers fighting for it ourselves.

The teachers and other public sector workers of NSW are angry and need More Than Thanks. And we are ready to fight for it!