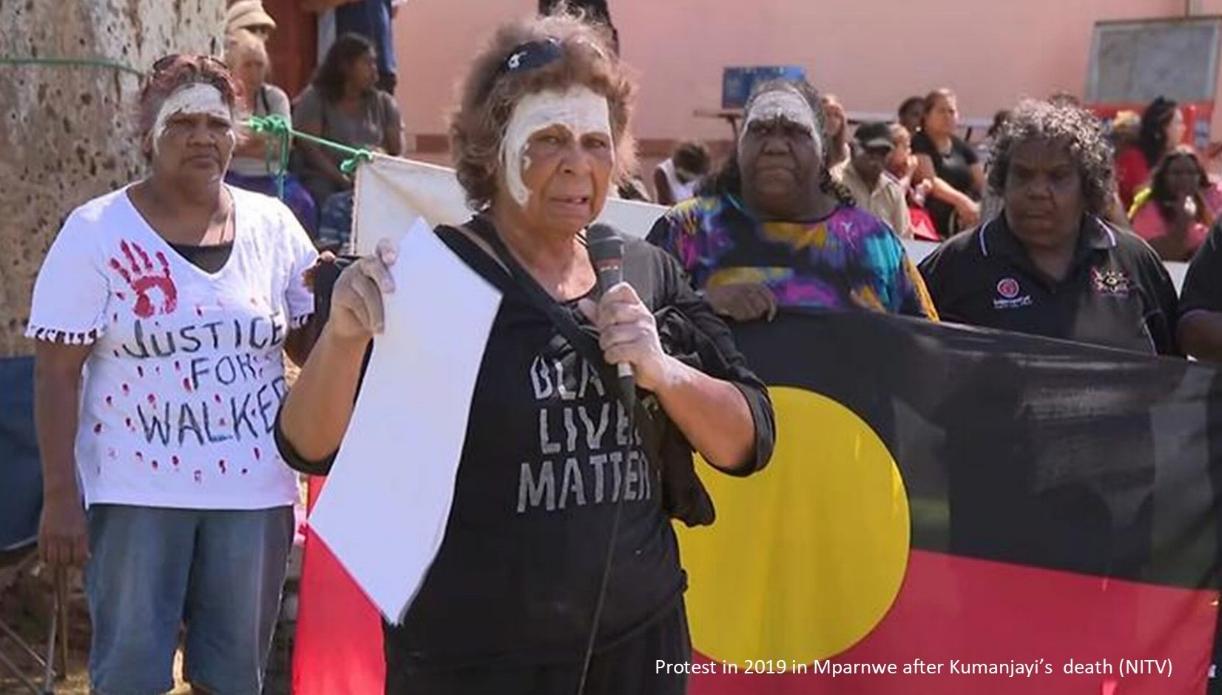 On 23 June 2007, the military invaded First Peoples’ communities, launching the Northern Territory Intervention.  A land grab, it was designed to divide and disempower First Peoples.

The full force of the capitalist state – its army, police, prisons, courts and laws – came down on them. The lies, humiliations and violence remain hidden from most not on the front lines.

On Saturday 18 June, nationwide protests demanded the Intervention’s end and that police guns immediately be removed from remote communities and townships.

After the acquittal of NT Police Constable Zachary Rolfe, who shot and killed young Kumanjayi Walker in remote Yuendumu, Warlpiri led the protests.

Just months before revered Warlpiri Elder Jakamarra Nelson died last year, he said the $7 million police centre was the only building to come to Yuendumu via the Intervention, a direct line from invasion to Intervention to the death of Kumanjayi.

In Mparntwe Alice Springs, Warlpiri Elder Ned Jampijinpa Hargraves was thanked for his enormous contribution to the struggle. He made clear ending deaths in custody applied to everyone, black and white.

Elder Valerie Napaljarri Martin warned that in this “so-called Australia” it could happen “to any young people … to any community.”

Speaking at the Sydney protest, east coast Aboriginal woman Taressa Mongta made clear the Intervention has increased oppression countrywide, "Whether it be our children or our women or our men, all the worst is thought of us, you know, and the worst punishments are dished out to us."

Their demands take direct aim at the capitalist state forces including defunding NT police. Warlpiri say only they must exercise governance and authority in their community.

Their statement says, “We do not want any more reports or inquiries that are not acted on. We already hold the answers and strategies we need. We do not want any more consultations with governments who do not listen to us. We demand our self determination, our rightful decision making authority, and our resources to be restored to us.”

Under the Intervention, they state, “We have suffered compulsory acquisition of township lands, prohibition on consideration of our customary law, attacks on the permit system, loss of our community council, imposition of government managers, widespread unemployment, control of our incomes, increased police numbers and extreme powers that drive police harassment and violence.”

Labor’s ‘Stronger Futures’ legislation extended the Intervention until July this year. Warlpiri demand it and to all its discriminatory powers and laws end, restoration of community control, and funding be “re-directed into our expert community services” with solutions “designed and implemented from the grassroots up.”

Ongoing assault
Warlpiri say, “The kardiya court system has failed us. It has not given us justice. Its processes have caused us harm and created more injustice.”

In Mparntwe, Arrernte Elder Peltherre Chris Tomlins called for restoration of “the principles of engagement”. This military term is a clear reference to the 234-year undeclared war on First Peoples.

A statement from Yolngu Elder and NT parliamentarian Yingiya Mark Guyula highlights damage and despair the Intervention creates, “from the ongoing assault of our culture and identity”.

Arrernte Elder Kumalie Riley described this heartache and demanded change, “Australia does not recognise or consult with us at all. We are always under the thumb” of whitefella laws.

“We are not terrorists. … What about listening to our laws? What about giving us the power to control our People ourselves?”

It is no small thing, the Warlpiri fight back after Rolfe’s acquittal. Their strength comes from Country, its Law and Culture that imbue them with knowledge of who they are, and what they must do.

Ending colonisation, our unfinished task
Yingiya Mark Guyula writes, “Liberal and Labor Governments have both contributed to the ruthless enforcement of the Intervention policies” to dehumanise and degrade First Peoples. He also finds hope in “a new government”.

Anthony Albanese announced the hated Basics’ Card will be non-compulsory. It took fifteen years of people’s struggle to achieve this. The ALP administration also intends to reverse the Coalition’s deliberate exclusion from electoral rolls of First Peoples in remote communities and elsewhere.  (Koori Mail 15/6/22)
These reforms are important, but leave a brutal colonialist system intact.

On behalf of corporate gas and resource bandits, Labor supports fracking and exploitation on First Peoples’ lands across the NT and elsewhere. Theft and suppression are what the Intervention was for. The overwhelmingly foreign-owned inheritors of invasion, will try to use the Intervention’s machinery, and its extensions interstate, to pave their way to massive tax-free profits.

But the time is right to expose them. Their manufactured energy crisis and gas price gouging, their naked greed, are on peoples’ lips far and wide.
For First Peoples’ allies, it’s time to join the dots and spread the word. They are the enemies of all our peoples.