US “Pacific Partnership Strategy” hits back at China 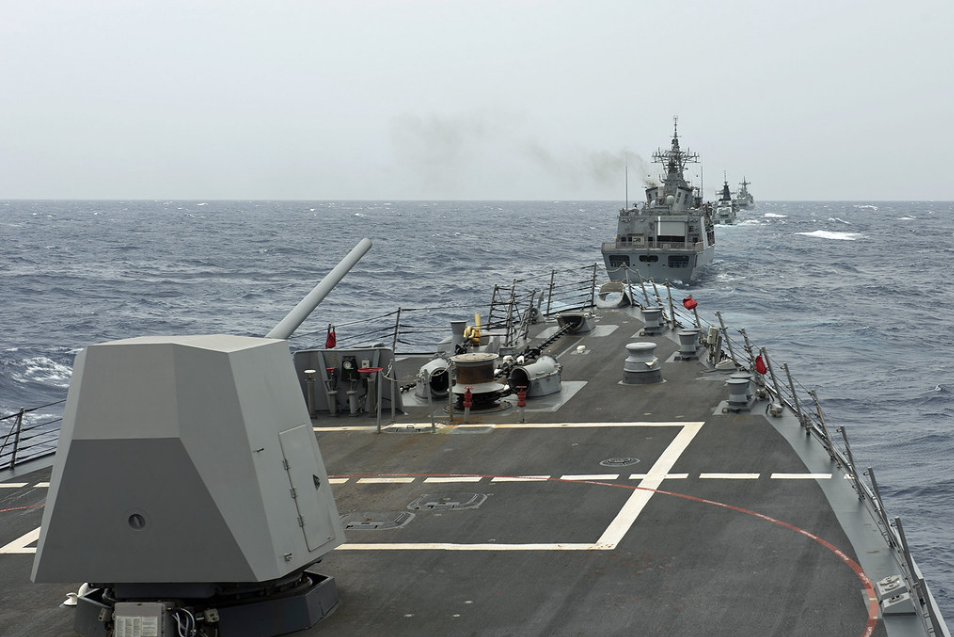 Moves by the US to establish a regional Pacific Partnership Strategy (PPS), has little to do with the economic development and defence and security interests of the twelve Pacific countries involved; it is nothing more than an attempt by the US to reassert its traditional hegemonic position from the challenge presented by China. Drawing heavily upon Australia as a strategic hub for 'US interests' the foreign policy initiative has followed neo-colonial principles as a means of protecting the US economy from competition overseas.

Moves by the Solomon Islands to reject the PPS are evidence of the growing anti-imperialist struggle taking place in the region.

The US used the summit to announce it was planning a US$810 million aid package for economic and security considerations, designed to counter China's growing regional influence. (1) In recent years many of the Pacific countries linked to the Pacific Islands Forum (PIF) have strengthened their diplomatic links with China. It has been viewed by Washington and the Pentagon with extreme disquiet and assessed as a serious challenge to US traditional regional hegemonic positions.

The traditional US position in the region, historically, has been based upon neo-colonial economic relations, foisted upon the newly independent countries decades ago through banking and financial institutions designed to siphon wealth, raw materials and resources from subject economies. Sustainable economic development in the region was never a serious consideration for US imperialism: the prolonging of poverty was a means by which the US retained its control of so-called independent countries. The recent changing regional balance of forces, however, has brought these matters to a head.

The US, for example, has been forced to apologise for having not 'paid enough attention to the region, creating opportunities for Beijing to expand its influence'. (2) It is also important to note the summit 'vision statement' was couched in sophisticated new-age terminology including: human-centred development, tackling climate change, the geo-politics and security of the Pacific region, commerce and industry and trade ties. In reality, however, the US was merely seek to prolong enforced compliance of the region in line with its usual regional foreign policy positions. It seeks no change.

In recent years there has been a concerted US-led diplomatic push to counter what are regarded as China's increasing regional influences. It has been marked by hostile diplomacy, diplomatic stand-offs and a constant series of war-games in preparation for real-war scenarios. Areas of the wider region including the South China Seas, the Korean peninsula, Taiwan Straits and the West and South Pacific, remain under US-led Cold War surveillance.

It has been noted from informed sources that 'the US was almost over-reacting in terms of timing and what they were seeking to achieve … there's almost a frantic nature to it'. (3) The diplomatic behaviour, however, would appear to closely follow military and intelligence assessments provided by US-led officials. Decisions taken a decade ago to transform the US Defence Intelligence Agency (DIA) and employ as many as 1,600 'collectors' globally to provide increased provision of assessments including those about the 'military modernisation under way in China' has assisted those in hawkish positions to unleash the present Cold War sweeping the Indo-Pacific. (4) At the inception of the program it was noted problems had already arisen with the US providing cover for the new operatives, and that US embassies usually hosted spies as diplomatic officials. (5)

Studies of those US-led intelligence assessments which have entered the public domain, also remain an interesting read. One, in particular, revealed the line of US-led thinking pursued by their intelligence services. The Pacific countries all possess exclusive economic zones (EEZs), which are often disproportionate to their actual land-mass size. Kiribati, for example, has a land-mass of 811 square kms, although its EEZ is 3,437,132 square kms. (6)
Following the diplomatic switch by the Solomon Islands and Kiribati from Taiwan to China, in September 2019, China gained diplomatic access to about eighty per cent of the regions EEZs. (7)

The fact the EEZs remain under different Pacific Islands sovereignty was not, however, regarded by the Pentagon as an important consideration. They would appear to have little respect for Pacific Islanders and the sovereignty of their EEZs. Their assumption that China would use its diplomatic personnel to take advantage of the EEZs is, therefore, not particularly sensible. The fact the intelligence assessments were subsequently used by the Pentagon, nevertheless, to raise fears China would use its enhanced diplomatic position to spy on sensitive US military installations situated along the equator can only be regarded as highly speculative. (8)

One matter arising with the Pacific EEZs, however, is ample quantities of rare-earth minerals and other forms of metalloids located inside the off-shore areas. Recent technological advances in deep-sea mining and mineral exploration techniques have raised the distinct possibility of China developing joint-projects with various Pacific countries to exploit their natural resources to benefit national economies and tie  them more closely to what China calls its “overseas development interests”. (9) Polymetallic nodules have already been found in the EEZ off the Cook Islands and Kiribati, cobalt deposits exist in the waters of Kiribati, Micronesia, the Marshall Islands and French Polynesia. Vast gold, hydro-carbons and nickel ore deposits exist in PNG. (10)

While the Pacific Island countries have a vested interest in diversifying their economies and controlling their own natural resources, the usual US-led regional position has been for mining companies to use Australia as a regional hub and then buy mining rights outright at cut-rate levels. The subsequent dividends, invariably, keep shareholders happy, although they have provided little benefit for the islanders since independence.

US-led military planning is totally preoccupied with Island Chain Theory; it is important, therefore, to study the diplomatic personnel involved and their varying levels of expertise in regional affairs for pursuing 'US interests'.

At the recent PPS summit in Washington, for example, the Biden administration picked the present US consul-general in Melbourne, Frankie Reed, to become the newly established US envoy for the whole Pacific region. He was formerly the ambassador to Fiji, Kiribati, Nauru and Tonga. (11) The announcement that the US was opening an Aid Mission in Suva next year together with an embassy in Honiara have to be seen in such  a light; the US has already planned to increase its regional diplomatic presence from six to nine embassies. (12)

The reaction of many Pacific Islanders to these US-led diplomatic forays and massive flows of finance capital has been mixed and varied. Those attending the two-day summit in Washington, for example, were issued with a US-drafted eleven-point declaration which they were expected to sign. The paternalistic manner in which the US-led diplomacy was conducted followed a common pattern, which has often proved counter-productive. It was officially reported, for example, that 'a large number of Pacific Island leaders have strongly objected to a section of the draft mentioning requirement that Pacific Island states consult with one another closely on security decisions with regional impacts'. (13) Their own 'national interests' were not even considered.

The Solomon Islands, furthermore, 'sought more time and parliamentary approval before the signing of the US proposals for the island nations'. (14) Under the circumstances the decision was extremely sensible, taking the ethnic-based political instability affecting the country and the need for those in power to retain protocol and official parliamentary procedures to avoid challenging allegations being made by influential opposition figures.

It is, therefore, interesting to note how Canberra viewed the summit and subsequent developments: coverage from Canberra once again demonised the Prime Minister of the Solomon Islands, Manasseh Sogavare as a regional 'bogeyman' more inclined to side with China than the US. (15) It has provided sufficient evidence, once again, of the escalation of US-led Cold War positions taken against the Solomon Islands.

These are difficult times and the continual role of the US and its militarisation programs present a serious challenge for all those living in the Indo-Pacific region: