Whom did Gillard’s leadership really serve? 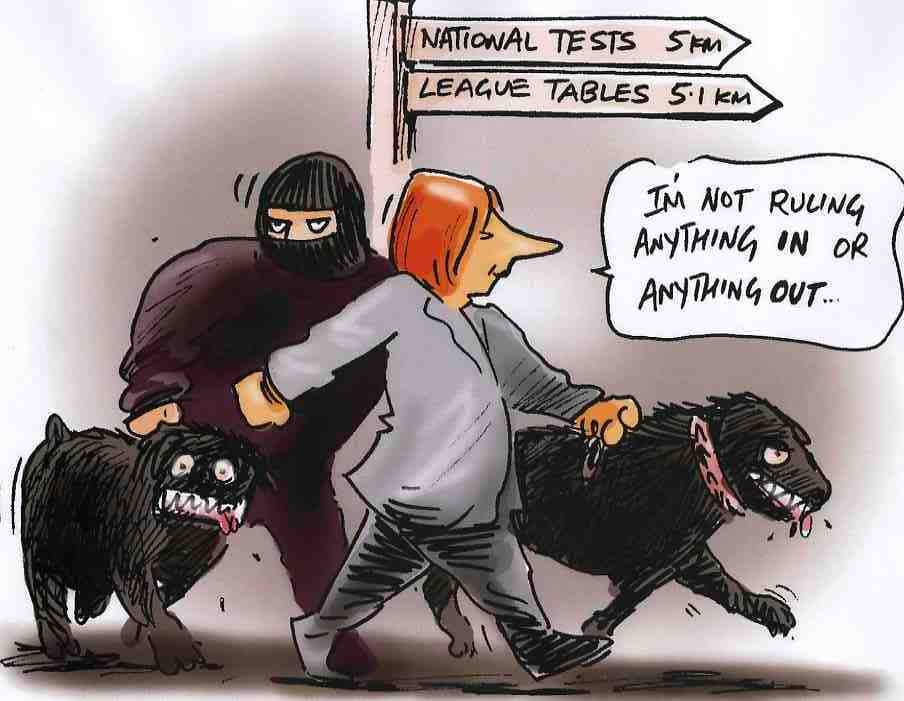 (Above: cartoon by Simon Kneebone from the SA Branch Australian Edcation Union Journal)

As Australia’s first female Prime Minister, Julia Gillard is perhaps best remembered for her famous "misogyny" speech.
The speech itself is rightly applauded for having given women who had suffered under decades and centuries of male superiority and contempt a voice that reverberated around the globe.

But to what extent does Gillard deserve the plaudits now being thrown her way as we remember that 10-year-old humiliation of Tony Abbott as leader of the Opposition?

ALP: a capitalist party that cynically uses the working class

Gillard rose in the ranks of the Labor Party not as an activist championing progressive causes, but as an apparatchik determined to advance her political career.

The same could be said of most Labor politicians – they play the factional games, they manoeuvre for pre-selection, they distance themselves from involvement with any issue likely to later prove embarrassing to them.

And they know that whilst they are in a Party that has based its chances of electoral success on winning the support of working class Australians, they need to keep the big end of town on-side or risk being campaigned against by the powerful media that is owned by and serves that class.

Gillard shared the Labor politicians’ readiness to cynically use the working class for their own electoral advancement.

Gillard warns strikers: "You will face the full force of the law!"

Gillard was given the shadow portfolio of Minister for Employment, Workplace Relations and Social Inclusion. In that capacity, and buoyed by a wave of working class anger at Howard’s and Abbott’s  "work choices" policy, she began negotiations with the ACTU for a replacement policy that would not empower workers but rather bind them to exploitation and loss of rights through a seemingly more “enlightened” set of legislation.

When Labor won the 2007 Federal election, Gillard was its Deputy leader and took on the portfolios of Education, Employment and Workplace Relations. She rushed to copy the very worst of US educational policies, setting herself up for conflict with parents and teachers. She abolished the hated WorkChoices, but replaced it with the equally bad Fair Work Australia bureaucracy with a vast repressive machinery directed at unions and at individual workers.

As Deputy PM and Industrial Relations Minister, Gillard got off to a very bad start when she savagely attacked Woodside-Burmah oil workers who went on strike in WA after the company downgraded their accommodation arrangements, threatening them with fines and imprisonment. "You will face the full force of the law!" she said, echoing the same anti-worker rhetoric that had previously been the hallmark of the Liberal Party.

As Acting Prime Minister in 2009, she threatened Australia Post, Qantas and NSW bus drivers – all declaring they would strike over new agreements - that "those who take unprotected action will face severe penalties".

When the Australian Education Union developed a campaign with parents to boycott the NAPLAN tests that she had modelled on standardised testing in the USA, she first tried to break the unity of teachers and parents by urging parents to "rouse up" against the teachers, then threatened to use strike-breakers to run NAPLAN tests. "I’m not ruling anything in or out", she declared.

Gillard was a supporter of the Liberal Party’s Australian Building and Construction Commission (ABCC). Rather than getting rid of this attack dog of the construction bosses, she brought it under the auspices of the Fair Work Act, arguing that the industry needed a "tough cop on the beat"”.  When construction worker Ark Tribe, persecuted by the ABCC for attending a safety meeting on site, and facing six months in jail, tried to talk to her at an election meeting, he was brushed aside. She refused to talk to him.

US bases get the nod

Gillard has all along been a cheerleader for US imperialism. In a 2008 speech in Washington, Gillard endorsed the ANZUS Alliance and described the United States as "a civilising global influence".

In March 2011, Gillard travelled to the US to celebrate the 60th anniversary of the ANZUS Alliance.  She met with Barak Obama and addressed a joint session of the US Congress, delivering what Richard Butler AC, former diplomat, former UN weapons inspector, former Governor of Tasmania described as having "reached unprecedented heights of sycophancy".

Her call for US imperialism to "be bold" was made in the context of a reference to Afghanistan, in relation to which she promised "Australia will stand firm with our ally the United States".

Visiting Australia later that year, Obama announced that a "marine rotational base" would be established at the Robertson Army Barracks near Darwin. Thus, under Gillard, US imperialism was gifted Australian territory to use for military purposes.

Opening the door to the mining companies

As Prime Minister, Kevin Rudd had been trying to win support for a new tax on miners. His Resources Super Profit Tax (RSPT) was a 40% tax on the 'super' profits made from the exploitation of Australia’s non-renewable resources including gold, nickel and uranium mining as well as sand and quarrying activities.
Where Rudd thought he could isolate the big miners from other sections of the capitalist class and use the extra revenue to serve the wider interests of that class, a big campaign, led by Gina Reinhart and "Twiggy" Forrest, both decked out in workers' clobber, convinced Gillard that Rudd had gone too far.

She orchestrated a campaign against him, seized the Prime Ministership and, in her first announcement post the coup, stated that she had now "opened the door of the government to the mining companies". The RSPT was consigned to the rubbish bin.

Hatred of women directed at Gillard

Despite Gillard’s anti-worker, pro-business and sycophantic service to US imperialism, her gender served to unite a chorus of women-hating males against her.

At anti-Government rallies, Tony Abbott as leader of the Opposition, stood in front of placards with slogans to "ditch the witch".

This unremitting stream of gender-based abuse came to a head when Gillard defended her appointment of Liberal defector Peter Slipper as Speaker of the House. It had come to light that he had sent text messages of his own containing vile and misogynistic content.

Abbott leapt to the attack, criticising Gillard for standing by Slipper. Gillard then delivered her "misogyny" speech, declaring that "the Government will not be lectured about sexism and misogyny by this man. Not now, not ever."

It was a fitting response to the abuse she had suffered. It not only went viral, but diverted attention from an issue that had seen women criticising a new policy being put through parliament by Gillard that day: an attempt to cut the single parents' pension.

Learn from Gillard's time to prepare for more attacks from Labor

There is a bit of a silly merry-go-round where working people grow sick of the reactionary policies of a Liberal government, and place their hopes on a change to Labor.  For a while there is a honeymoon period, and then the gloss wears off and disillusion sets in as Labor once again sets about serving the big end of town.  The Liberals then cash in on the disillusion and get another guernsey as the government.

It is right to acknowledge Gillard’s "misogyny" speech.

But it is better to remember the essential service she provided to the ruling class and to US imperialism.

If we can be forearmed to expect that service by Labor to the class that oppresses and exploits us, then we can better develop our own independent working class organisation and activity.

It is important to cast away parliamentary illusions and fight for genuine anti-imperialist independence and for socialism.