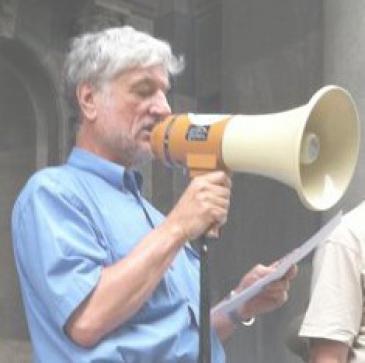 It is with sincere regret that the Party announces the death of a very good friend, Dr. Don Longo.

Don was born to poor Italian peasant parents in 1952 and emigrated to Australia in 1960. He knew little of the English language on his arrival here, but was hard-working enough to have graduated in 1979 from the University of Adelaide with first class honours in History. He had also studied French and, in 1985, as a mature age student, he gained a PhD, written in French, from the Université de Paris VIII.

Don had joined the Communist Party of Australia in the 1970s, but was not at all sectarian in his awareness of and interest in all progressive and socialist organisations and causes.

As an historian, Don was naturally interested in the history of the Italian Australians.

In 2012, Don wrote an article for Carnevale, the program for the annual Carnevale Festival for Italians in South Australia. The article was an introduction to Rafaello Carboni, the Italian revolutionary democrat who was one of the 13 alleged ring-leaders of the 1854 Eureka Rebellion. Carboni chronicled the events at Ballarat and left us with his detailed history of the event.

Don recognised that Carboni “hated all forms of oppression by the ruling classes” and was an active participant in the events. “Carboni's opposition to despotism of any kind, his revolutionary experience and most of all his linguistic skills made him indispensable to the miners' cause. The rebel leader and Carboni's friend, lrishman Peter Lalor, relied on the articulate Carboni as his interpreter to communicate with the European miners.”

Don also noted that “Carboni lived for a time among the Tarrang tribe of the Loddon Valley”.

The article came to the attention of comrades in the SA branch of the Spirit of Eureka who approached Don to assist with the organisation of the annual Eureka Day Dinner. Thus began a long and fruitful relationship between Don and members and supporters of the CPA (M-L) in South Australia.

Don published two books on the experiences of soldiers from SA’s Yorke Peninsula during the first imperialist war. These were works of an historian deeply engaged with the community from which his wife and co-worker Lyn (nee Klopp) had come.

In 2021, Don delivered a talk on the Paris Commune to commemorate its 150th anniversary at the SA Labour History Society. Excerpts were printed on our website.

Throughout 2020, Don and Lyn were members of a committee organising an event to commemorate the 50th anniversary of the Vietnam Moratorium Committee. After the event, whose speakers included a former SA Premier and a CPA (M-L) member, Don and Lyn arranged for the publication of the presentations by the speakers and a question and answer session that followed. The book, Moratorium Now! Memories of protest against the Vietnam War in South Australia, 1965–1972, was initially financed by loans, half coming from the Party and half from the SA Labour History Society.

Don and Lyn were aware, through the organising of the VMC commemoration, that a number of radicals and activists from that era were either dying, or become infirm through old age, or becoming senile, and that the links to the history of the era were tenuous at best.

They applied for a grant to undertake an oral history project, ‘Days Of Wrath, Years Of Hope: Memories of Protest and Civil Disobedience in South Australia 1965-1983’ which involved identifying, contacting and then recording the memories of 55 participants in a range of people’s struggles. Interviews lasted from 1.5 hours to nearly 6 hours and had to be transcribed and then sent to interviewees for checking and final approval.

This invaluable project will now have to be finished by Don’s wife, Lyn. Regrettably, she and Don had left interviewing him to the end, an interview that will not now be able to take place.

Since his initial involvement with Spirit of Eureka, to his acceptance of and work with members of the CPA (M-L) in various undertakings, the Party has regarded Don as a true friend.

He will be sadly missed by those of our comrades who knew him and worked with him.