Your browser is not Javascript enable or you have turn it off. We recommend you to activate for better security reason https://elturbion.com ). He is leading a campaign to link together people opposed to mining multinational Glencore which operates 16 of Australia's coal mines. The following is a presentation recently made to an ICOR webinar on the environment - eds. " property="og:description" />


https://elturbion.com ). He is leading a campaign to link together people opposed to mining multinational Glencore which operates 16 of Australia's coal mines. The following is a presentation recently made to an ICOR webinar on the environment - eds. " property="og:description" /> 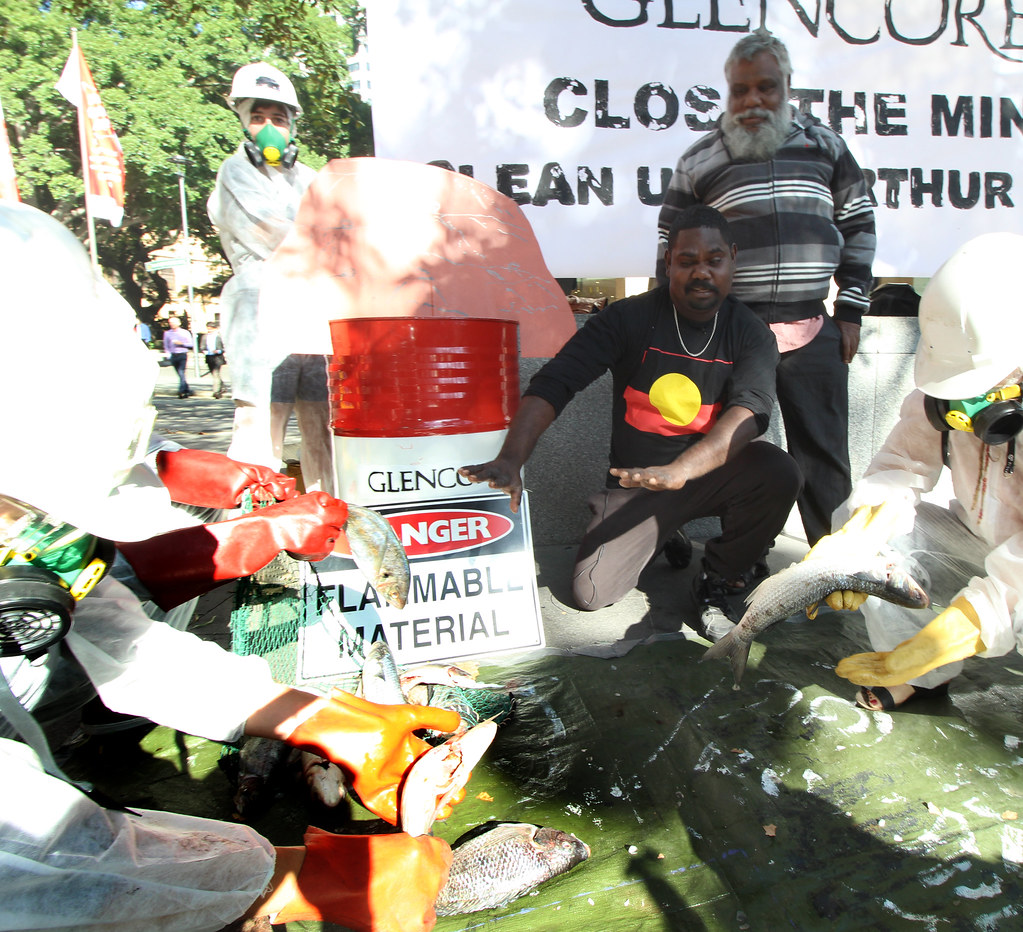 (Photo credit: "NT Borroloola Indigenous travel to Glencore in Sydney" by lockthegate is licensed under CC BY 2.0.)

Omar Vera is a Colombian journalist, researcher of environmental conflicts and social movements, and director of the techno-activist and journalistic collective El Turbión (https://elturbion.com ). He is leading a campaign to link together people opposed to mining multinational Glencore which operates 16 of Australia's coal mines. The following is a presentation recently made to an ICOR webinar on the environment - eds.

The coal business has become one of the most lucrative in the world today. The post-COVID-19 economic revival plans of the major economies of the global north have called for a significant increase in the production of electrical energy destined mainly for analog and digital industries, commerce and, to a lesser extent, domestic consumption. This has multiplied the demand for fossil fuels, mainly extracted from southern countries, and destined to be burned in thermoelectric plants.

According to the International Energy Agency (IEA), in 2021 the global demand for electricity rose by 6% to more than 1,500 Twh and the use of thermal coal for electricity generation increased by 9% to a level never before recorded to cover 36% of this voracious consumption that has China, the United States, India and Europe, especially Germany, as the countries that burned the largest amount of this mineral. Likewise, according to the international entity, CO 2 emissions related to electric energy were 36.3 billion metric tons, the highest amount ever recorded, of which the majority were related to coal burning, which corresponded to 15.5 billion tons (gigatonnes). Europe was the largest contributor of this greenhouse gas with more than 700 grams of CO 2 per kWh produced, followed by China, the United States and India.

At the beginning of 2022, war broke out in Ukraine, after months of tensions over gas prices from Russia and uncertainty about the future of energy production in Europe. The shortage not only sent international fossil fuel prices soaring, but also caused the world's strongest economies to turn to coal, which reached its highest price in history on March 8 at USD 439 per tonne.

In short, the big mining companies are richer today than ever before thanks to the dependence on fossil fuels to enforce the economic revival plans of the imperialist bourgeoisie, to the unjust war in Ukraine and to the power they wield over coal exporting countries which, like Colombia, are located in the global south. Meanwhile, we see how the plans for 'decarbonization' of the world, the agreements of the Conference of the Parties on Climate Change (COP) and the internal regulations of the countries to reduce greenhouse gas emissions are going down the drain.

The voracious appetite of the most powerful economies and the large international financial monopolies is destroying life on the planet, while the peoples who suffer colonial and neocolonial oppression are left with holes in the earth, the waters of our rivers and our contaminated soils, displaced communities and thousands of sick and disabled workers to deliver coal to them.

Since 2012, El Turbión has accompanied union organizations of mine workers and communities affected by coal mining in northern Colombia. At that time, workers at the La Jagua de Ibirico mine, which until a few years ago was the fourth largest open-pit coal mine in the world, rose up and carried out a 92-day strike against Glencore, a company they accused of evading taxes in Colombia, committing all kinds of abuses against workers (an estimated 1,200 workers were ill out of the more than 4,000 who worked at the mine) and environmental damage that is impossible to repair after almost three decades of operations.

From there, we have documented the impacts of coal mining on the rainforest, rivers, soils and air in northern Colombia, where the country's largest extraction pits are located, and we have accompanied the struggles of the workers and the affected indigenous, Afro-descendant and peasant communities to vindicate their rights and strengthen, through investigative journalism, their capacity for organization and collective bargaining. We have also investigated human rights violations committed in mining regions and the responsibility of companies such as Glencore and Drummond in the murders of trade unionists, forced displacement of communities and the death of at least 4,000 indigenous Wayúu children from physical hunger and thirst due to water grabbing for mining at El Cerrejón, the largest open-pit coal mine in Latin America.

Over time, Glencore became the largest mining company in the world, precisely thanks to the 'relaxation' of the rules of the global north regarding the consumption of coal for electricity production and the global shortage of the mineral derived from the port crisis and the war in Ukraine. This, of course, in addition to various financial maneuvers by the company to strengthen its monopoly, which included aggressive acquisitions of mines around the world, closure of some of its facilities with massive layoffs of thousands of workers, evasion of taxes and environmental remediation obligations, and even the use of child slave labor by its suppliers, all of these behaviors denounced by different social organizations worldwide.

In 2021, this company whose headquarters are located in the city of Baar in Switzerland, reached total revenues of USD 203,751 million dollars (203.7 billion in English), and counts among its investors the pension funds of countries such as Sweden and Denmark, public companies in the electricity sector and various capital funds (many of them of a public nature in the countries of the global north) that benefit from the company's bad practices in oppressed nations and its gigantic contribution to the emission of greenhouse gases. It currently operates 16 coal mines in Australia, the leading exporter of this fuel; 8 in South Africa, the fifth largest exporter; and 1 in Colombia.

In this country, in this Colombia that is located in a corner of South America, between 2021 and 2022 Glencore took control of the El Cerrejón mine and closed those of La Jagua de Ibirico and Calenturitas, throwing thousands of workers into the street and returning to the Colombian State the mining lots and licenses to be sold to another company or to resume activities there, depending on the winds of the international market. In this way, it managed to evade a good part of its responsibilities with environmental, labor and criminal reparations for three decades of activities, while informing its shareholders of an exemplary conduct in its operations and assuring to maintain one of the lowest carbon emissions of the extractive industries in a gigantic greenwashing operation that assures it an important flow of capital.

For the first half of this year Glencore had extracted 55.4 million metric tons (mt) of thermal coal from its mines in the world, of which it had already sold 35, obtaining revenues of USD 13,598 million: 27.6 mt were exported from Australia, 6.3 mt from South Africa and 10.8 from Colombia, according to the half-yearly report published for its investors on its website. Despite complaints from environmentalists, Indigenous peoples and workers, the company expects to increase production by the end of this year, as well as its sales to the global north and its profits.

We at El Turbión are working on a cross-border investigation with investigative journalist collectives from South Africa, Switzerland, Denmark and Sweden, and information from Australia to expose this 'green' greenwashing and other questionable behavior by the company.

With this we intend to:

1. reveal the environmental impacts produced by the coal mining activity developed by Glencore in Colombia and the possible contradictions between these and the information reported by the company in Switzerland and to its investors in different European countries.
2. Compare this situation with that of Australia and South Africa, and possibly include Canada, where exploration work is being carried out.
3. Expose the green lies that Glencore spreads in its home country (Switzerland) and among its investors in terms of environmental impacts and violations of human and labor rights.
4. Create a public repository of information on Glencore's misbehavior (which can be organized as a mapping database, for example) in its coal mining operations, which can then be extended to its other activities.
5. To provide the world's social and workers' movements with meaningful information about the company's behavior, so that knowledge about it can be deepened and more effective strategies can be built as people around the world struggle to stop the human, environmental, social and labor rights violations it commits.