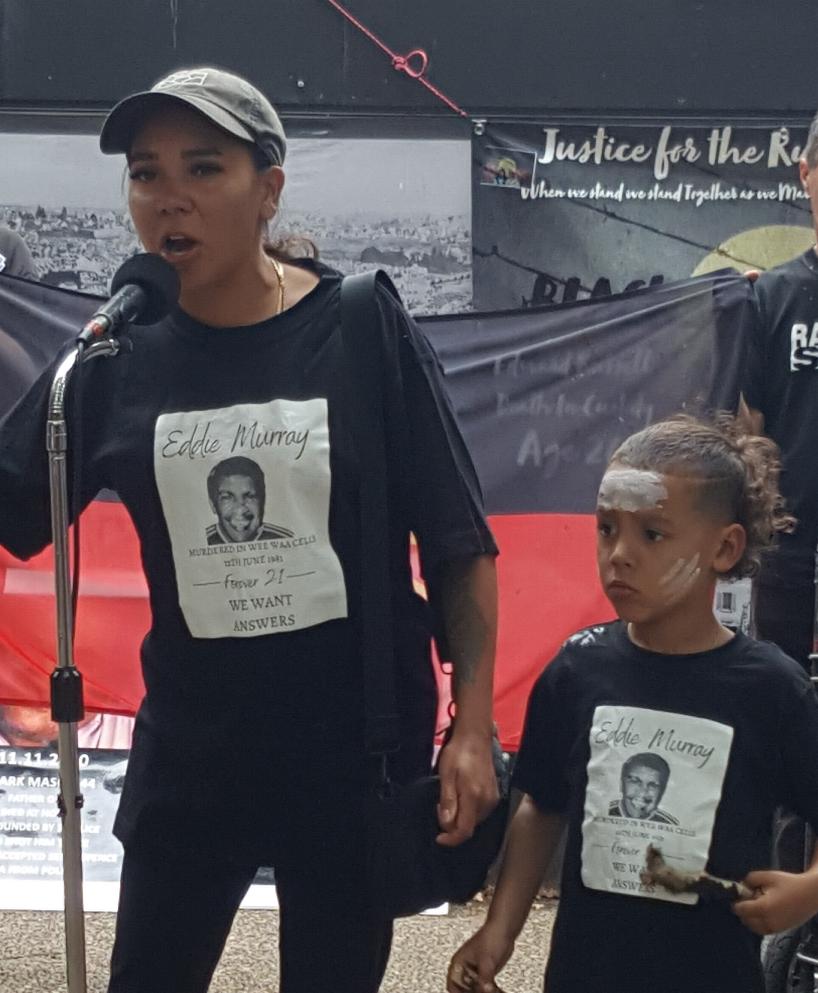 (Above: Kyah Patten speaks at the rally.)

Sydney is the first point of British invasion. Aboriginal warriors across these lands have been fighting ever since. On Saturday 22 October, deaths in custody activist Paul Silva told Sydney protesters, ‘People on remand are still coming out in body bags.’

It took years of organisation and struggle to get UN prisons’ inspectors here. He said those officials currently gathering information about torture of prisoners in Australia had been refused entry to NSW jails.

What are they hiding? We already know! They fear the truth escaping their cage of lies.

David’s mother Leetona Dungay told yet again the terrible circumstances of her son’s suffocation in Long Bay Jail. Her dignity is unflinching. She said the killings go back to 1788, but for state enforcers they are just numbers, statistics, not people.

In cages for 23 hours a day

Gwenda Stanley a Gomeroi representative of both the Aboriginal Tent Embassy and Fighting in Solidarity Towards Treaties said, ‘This country needs a bill of rights! It doesn’t matter which party, Liberal or Labor, they’ve fucking failed us!

‘The system isn’t broken, it’s working perfectly. It’s working how they planned. We don’t need to fix it. We need to break the fucking system down!’ she thundered.

‘On January 26, 1838 Major Nunn travelled throughout my Country and killed my ancestors,’ she said. ‘Raped and pillaged. Galloped ‘em down with horses. There’s a place called Slaughterhouse.

Gwenda Stanley read a Grandmothers Against Removals (GMAR) statement from Central Australia and the Top End demanding closure of Don Dale and abolition of youth prisons.

The statement said, ‘Torture in our prisons is not an accident … have not been found guilty of a crime, yet they are locked in cages and cells for 23 hours a day. Some are young as ten! ]

It continued, ‘The NT Government won an election promising’ to change all this, but ‘threw the promises in the bin. It has ramped up the criminalisation and incarceration of Aboriginal kids,’ violating the UN Conventions on the Rights of the Child.

The 26 January 1938 Day of Mourning was the first Aboriginal protest to break colonial state borders. It was jointly organised the Aborigines Progressive Association and the Australian Aborigines League. The site is always honoured with a sit down by First Peoples’ Sydney protests.

Yorta Yorta man Jack Patten was a leader of both the Day of Mourning and the 1939 Cummeragunja Mission walk-off.

Kyah Patten is his great granddaughter. She is also the granddaughter of Arthur and Leila Murray, who battled much of their lives to bring justice for their murdered son, Eddy Murray.  She is small but courageous.

Racism remains the most vicious of the colonial state’s weapons. But how brave these fighters are, both young and old!

How can we not be inspired by them?

Despite everything she’s been through, despite the relatively small crowd and the overkill in police numbers, Leetona Dungay has confidence in the quietly growing awareness of our peoples.

She looked up at the crowd, smiling. ‘We’re gonna win,’ she said.