The 2022 US National security Strategy 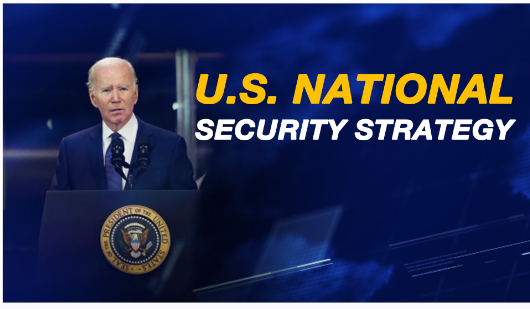 The new US National Security Strategy (NSS) was released by the Biden presidential administration in the White House on 12 October 2022. It contained few revelations: a capacity for self-deception was, however, immediately recognisable. The new strategy also acknowledged the changing balance of forces affecting traditional US hegemonic positions with increased competition from China.

The NSS does not make scintillating reading: the bland 48-page document is a study of the predicament in which the US has found itself. It has acknowledged, for example, that 'the world is becoming more divided and unstable … with … the risk of conflict between the world powers is increasing' (page 7), while continuing to push the line that 'the US remains the world's leading power … although … the PRC presents America's most consequential geopolitical challenge'. (page 11)

Domestic economic considerations have been dealt with by the Biden administration along the lines that 'our economy is dynamic', which flies on the face of recent economic forecasting which has shown the contrary. Economic growth rates of the advanced, industrial economies have clearly fallen and are set to fall still further with the threat of a global recession next year:

Economic projections for next year from reliable sources have already revealed the US is facing uncertain times:

Elsewhere, economic forecasts have predicted an even more dismal scenario. (3)

The present-day outlook of the US economy rests largely upon their advocacy of the de-regulation, privatisation and liberalisation of the global economy four decades ago. The concerted push, through international financial institutions under US control, effectively removed the safeguards of sovereign economies ensuring they were both vulnerable and highly susceptible to global trends. It is not particularly difficult to find examples of the problem: issues arising in the UK with the recent Truss budget have revealed widespread malaise amongst senior officials in banking and international financial institutions. The British government was immediately forced to totally discard the budget, indeed to discard Truss herself, in fear of a pending economic catastrophe.

The NSS, nevertheless, continues to claim that 'the US remains the world's leading power .. and ... our leadership in the world and our ability to shape the terms of the world order'. (pages 7 and 48) Reliable economic forecasting, however, has already shown China is very likely to dislodge the US as global economic leader by the end of the present decade.

Domestic economic policy is dealt with in the NSS with 'modernising our military … and … investing in our defence workforce'. (page 48) Corporate leaders in the US military-industrial complex must be rubbing their greasy hands with glee.

It is, however, the foreign policy side of the NSS which is, perhaps, the most revealing part of the document. Recent developments have been assessed as having 'prioritised America … to promote our values across the globe'. (page 48) It would appear that this has not been so successful: in region after region the US has experienced difficulties maintaining hegemonic positions.

Part 4 of the NSS, Our Strategy by Region, deals with US global foreign policy. (pages 37-47) The Indo-Pacific region section of the document notes 'we affirm the centrality of ASEAN', together with an expansion of US diplomatic provision. It does not, however, acknowledge many of the ASEAN bloc members have no wish to be seen to take sides between the US and China; they have vested interests in maintaining a low profile and promoting policies which serve their own national interests. They are hardly 'reliable' allies for the US when dealing with the possibility of 'real-war scenarios'.

When dealing with the issue of China, the NSS document, nevertheless, has promoted three key elements: investment in the US; alignment with allies; competition with China. (page 24) Such a position would appear curiously out-of-step with trends both domestically and globally which seriously affect the US. It is very politically unstable, a problem which has continued to hinder their ability to implement any policies.

Coverage about the NSS in Australia has tended to be extremely limited; the Australian newspaper did, however, run a seven-column article. It read  as if it was the outcome of a briefing with the US diplomatic service rather than an informed and sensible opinion from the original document. It also concluded, interestingly, with a statement from a certain Michael Mazaar of the Rand Corporation, a Washington-based corporate intelligence think-tank organisation. He drew attention to how 'the Biden administration would have to urgently develop economic and investment policies to compete for influence in the developing world as well as to bolster defence capabilities'. (4)  In just one sentence Mazaar concisely clarified what it took the Biden administration 48 pages of an official government report. and an Australian journalist 70 cms column space.