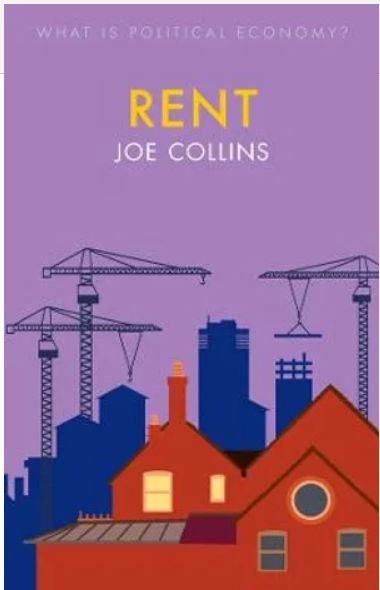 Joe Collins, the author of Rent (Polity Press) is a lecturer in Political Economy at the University of Sydney. Rent is the sixth in a series titled What Is Political Economy? The other titles in the series are Work, Austerity, Money, Value and Consumption.

When we think of rent we usually think of it as the amount of money paid regularly to a land-owner for the use of their landed property especially for farming or housing. This was the original meaning of rent and the one that affects many Australians trying to keep a roof over their heads. We constantly read of the problems of renters such as the shortage of affordable rental properties and constantly rising rents.

Collins continues his tracing of rent theory from classical economic theory through to what he calls mainstream rent theory and to modern political economy.

Under the influence of these theories the meaning of rent has broadened to include economic rent which means a component of the price paid to the owner of a factor of production above the amount necessary to maintain that factor in its current use, due to the monopoly position of the owner or the scarcity of that factor. With this scenario there can be many different types of payments which can be classed as rents.

Rent-seeking occurs in all capitalist countries, (we can all think of plenty of examples in Australia!), but is very common in countries where the level of corruption in the government and public service is much higher than in Australia.

Perhaps due to the strictures of a word limit (the book is 116 pages in total) Collins states that it is not the objective of the book to ”advocate on behalf of a preferred view” of rent. Yet intriguingly he mentions that “here is one – the SoP framework – but it is of no concern in this current study to stake claims as to its superiority” (p.89). All very well, but then why mention it if you are not going to at least outline why such an approach to rent compares more favourably with others? Sometimes the brevity of Collins’ text makes for a somewhat challenging read, but this does not detract from his timely and important intervention into this area of political economy.

Anyone who has tried to study the concept of rent and its role in the economy will find this book useful in helping them to gain a better understanding of rent.