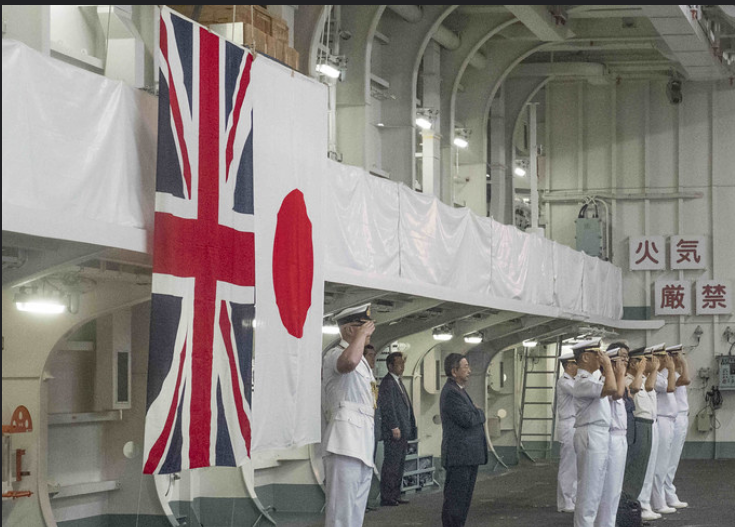 Recent developments suggest that the Japan and the UK are set to embark on a pact which aims to strengthen military co-operation and deter what they call the rising threat that China poses. This deal, known as the “Reciprocal Access Agreement” will remove the bureaucracy associated with military exercises and operations between the two countries and is also a significant symbolic agreement given the high levels of tension between the Americas and countries in the Pacific.

The past two years have seen both the US and Japan increasing military efforts to prepare for a potential conflict between China and Taiwan. Recent statements from the UK show us that Rishi Sunak is no less hawkish than his predecessors – the Japanese Foreign Minister stated that both Japanese PM Kishida and Sunak had pledged to accelerate the consultation of a Reciprocal Access Agreement. What this shows us is that the American imperialist bloc is widening: no longer are Asian partnerships restricted to just the US, but other US allies can serve as deployment bases for other partners. It is clearly not “democracy” that the US and their allies are vying for in the Asia-Pacific but the strengthening of military imperialist relations and a monopoly on the extraction of value from the manufacturing hubs of the Global South.

What does this mean for Australia?

The UK and the US are not alone in their warmongering. In January this year, the Japan-Australia RAA agreement was signed in the name of bilateral security and defence cooperation under the Morrison government. The Australia-Japan Joint Declaration on Security Cooperation was also recently signed, again in response to a Chinese threat. The declaration for the original RAA which was signed suggests cooperation between Japan and Australia so as to “resist economic coercion and disinformation”, a dig at China’s rise in the Indo-Pacific. That the strengthening of Australia’s ties with Japan happened with the US and Japan engaging in joint military exercises is no coincidence. It points to a clear agenda of the Australian ruling class to participate in US and UK led imperialism, beholden to these ties by a history of economic cooperation and direct investment in key sectors of the economy. That the Joint Declaration was signed under the government of a Prime Minister to the “left” of the Labor Party ultimately points to a bipartisan commitment to be the running lapdog of US imperialism.

Along with their military efforts, Japan is securing economic ties in Australian industry. This week, Madeleine King, the Minister for Resources and Northern Australia is visiting Japan to welcome further investments in Australian energy and resources. In 2020, Japan was Australia’s second-largest source of foreign investment, approximating $132 billion. Far from a healthy partnership as members of the ruling class may suggest, investments in Australian industry increase the stakes that Japan has in directing the production and distribution of key LNG ports. It is necessary to look past the appearance of foreign direct investment and into its actual content – which in Australia’s case is a greater reliance on investment from neighbouring countries to fund domestic programs.

There is a solution – nationalising key industries will ensure a delinking from international finance capital and funding for key domestic programs like education, health and the well-being of all Australians.

What we need is an independent, working-class and socialist agenda!