Preliminary proposals on the attitude and position of Marxist-Leninist-Maoist activists in the current mass struggle ... 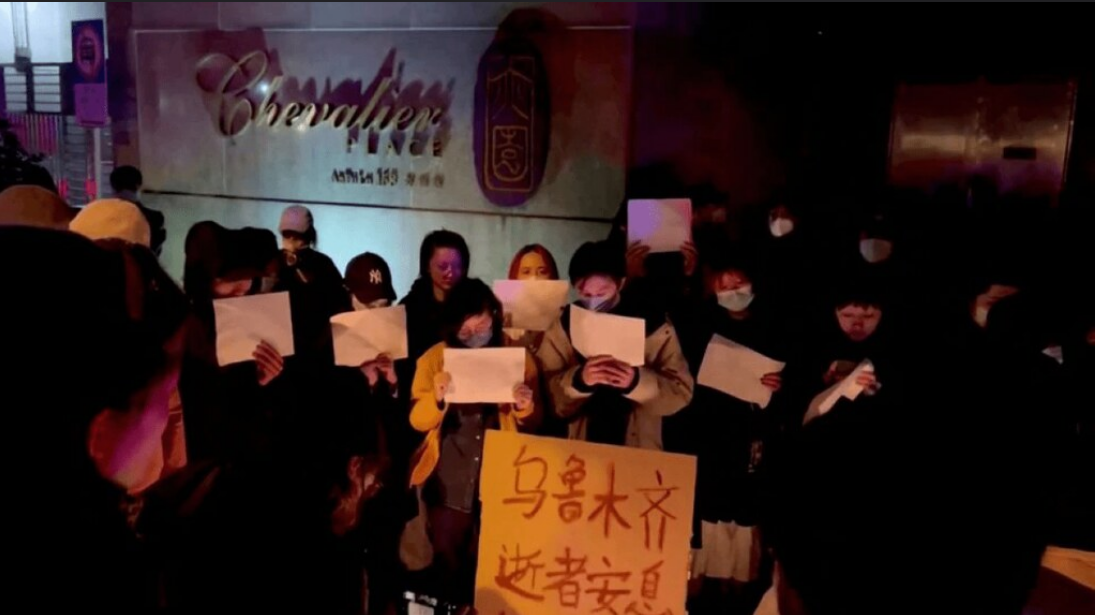 Above: Shanghai protesters hold blank sheets of paper (white is the colour of mourning) with a sign that reads: “Urumqi – May the dead rest in peace”        Photo: Flickr

(We have translated this article from the officially sanctioned Red China website. The views are those of the Chinese author “Voyage One”. It is important to break through translation barriers and learn what we can from sources that appear trustworthy. A Chinese source has provided this additional comment: "Regarding to the covid policy, the Chinese government is, at least at the moment, still enforcing the so called "dynamic zero covid" policy, though there are signs that might indicate a relax in restrictions. China is still keeping its health code with a traffic light system and there is no sign of its ending. There have been cases of applying a yellow code for population control, so that potential "trouble makers" for the state, despite not being a close contact of a positive case, will not be able to freely commute, which is quite concerning." Our confidence lies with the Chinese working class – Eds.)

Preliminary proposals on the attitude and position of Marxist-Leninist-Maoist activists in the current mass struggle ...

Dear comrades, in the past few days, large-scale protests and demonstrations against the reactionary lockdown policy of the bourgeois authorities have broken out in major cities in the country. After discussing with some comrades of the editorial department, I would like to put forward some preliminary suggestions on the current situation of struggle. Due to the rapid development of the situation, it is too late to consult with all comrades of the editorial department and comrades of alternate editors, and if there are errors and deficiencies in the suggestions, all comrade editors and netizens are welcome to criticize and revise their opinions.

On the 25th of this month, large-scale mass protests broke out in Urumqi against the reactionary lockdown policy of the bourgeois authorities and demanded the return to normal life. In the following two days, mass demonstrations broke out in Shanghai, Beijing, Guangzhou, Wuhan, Chengdu, Lanzhou and other cities. According to preliminary information, the scale of demonstrations in various localities has ranged from several hundred to several thousand people, and has in fact formed a nationwide climax of mass struggle. In the mass struggles everywhere, part of them are led by petty-bourgeois liberals and have attracted the coverage and attention of the media of the imperialist countries.

Since the beginning of the Corona virus epidemic in 2020, the bourgeois authorities have repeatedly implemented the so-called "lockdown" policy of illegally restricting the freedom of travel of the people throughout the country, which has brought great difficulties to the daily life of the broad masses of the people, and caused a considerable number of unnecessary deaths in some areas for various reasons. In the name of epidemic prevention, the bourgeois authorities have forced the people to use the so-called "health code" in a vain attempt to exercise all-round surveillance over political activists and the general public, and to suppress all possible activities against exploitation and oppression at any time. After enduring years of hardship and the fact that the fatality rate of the Corona virus epidemic has dropped significantly, the struggle of the broad masses of the people against the lockdown is completely legitimate and deserves our support.

In the normal period of capitalist development, because the bourgeoisie controls all the traditional media and most of the social media, because part of the bourgeoisie is bound to collude with and use the petty-bourgeois liberals, and because international imperialism will inevitably fan the flames and raise the flag for China's petty-bourgeois liberals in order to interfere with the purpose of China's class struggle, it is still inevitable that petty-bourgeois liberals will play a certain role in the mass struggle and even steal the leadership of the mass movement in a certain period and in some places. This situation can only take place after the advent of the revolutionary situation, with the development of the struggle, and especially with the growing realisation of the broad masses of the working masses in the actual struggle that even their most basic and fundamental interests cannot be satisfied in capitalism.

The hardship and suffering caused to the masses by the Covid-19 epidemic, and the reactionary anti-epidemic policy of the bourgeoisie, has further exacerbated the contradictions of Chinese capitalism, but is not a decisive factor in the inevitable failure to resolve and overcome the contradictions of Chinese capitalism. There is also disagreement within the bourgeoisie as to the current epidemic prevention policy and the exact measures to be taken in monitoring and suppressing the people.

The development of the basic contradictions of capitalism in China is leading to the accelerated depletion of surplus labour in rural areas. The exhaustion of this surplus labour force to a certain extent will inevitably lead to a fundamental change in the balance of forces between the two major classes, the bourgeoisie and the proletariat. This change in the balance of forces will eventually make the struggle of the proletariat against bourgeois exploitation more and more widespread and more powerful, until the general collapse of capitalist labour discipline will take place on a national scale. The struggle of the workers of Foxconn in Henan Province in the past period and the experience of their initial victories are an exercise in the general collapse of capitalist labour discipline in the future. The struggle of Foxconn workers, regardless of content and form, is different from the struggle of the masses everywhere to simply resist the lockdown, and even more different from the performance demonstration struggle led by liberal activists.

China's capitalist accumulation is inseparable from the brutal exploitation of hundreds of millions of workers providing cheap labour. Once capitalist labour discipline generally collapses, the capitalist economy can no longer be sustained; once the capitalist accumulation order generally collapses, the rule of the bourgeoisie can no longer be maintained. At that time, the logic of actual struggle will inevitably lead to a rapid political awakening of hundreds of millions of working people, thus creating conditions for the comprehensive and universal integration of Marxist-Leninist-Maoist activists with the working masses, and the short-term and immediate interests of the working masses will converge with their long-term and fundamental interests, so that the struggle of the working masses for the most basic and minimum interests will lead them to socialism.

With regard to the current climax of the mass struggle, we would like to preliminarily put forward the following suggestions, which we invite all comrades to discuss and criticize:

One. Think calmly, observe closely, and strive to understand the various classes and political factions participating in the current mass struggle and their role in the struggle.

Two. Comrades who have the capacity should actively collect information on all aspects of this mass struggle, paying particular attention to understanding the stance and attitude of their relatives and friends around them towards the struggle in various places.

Three. In principle, do not participate in any demonstrations that are indeed led by liberals, but there is no rush to criticize liberal leadership and its political slogans in public. Criticism of liberal positions and tactics can be carried out as appropriate when the struggle has come to an end and the position and attitude of the general public is more certain.

Four. If some Marxist-Leninist-Maoist activists themselves have the conditions and after observation confirm that some struggles are indeed spontaneous struggles of the masses against the bourgeois reactionary blockade policy or for the legitimate interests of other masses, even if liberals participate (but as long as they are not led by liberals), Marxist-Leninist-Maoist activists can participate in such struggles. The purpose of participation is not to guide or "lead" the masses, nor to put forward political slogans, but to gain experience and temper.

Five. It is recommended that progressive websites that exist openly in the country immediately begin to adjust the previous propaganda policy on epidemic prevention policies, stop supporting the zero-elimination policy of the bourgeois authorities, respond to the demands of the people in an appropriate way under the conditions of domestic class struggle, and cooperate with the people's struggle against lockdown.

Six. Soldiers are impermanent, and water is impermanent. Class struggle is a complex and sharp social phenomenon, which must be subject to historical necessity and cannot but also carry considerable contingency. The climax of this mass struggle is still developing, and although it will not develop into a revolutionary situation, it may still deal a heavy blow to, and shake the current bourgeois rule and accelerate the development of, the contradictions of Chinese capitalism. All Marxist-Leninist-Maoist activists must be energetic and ready to fight, adjust their understanding and judgment at any time in light of the development of the struggle situation, and be prepared to participate in even more arduous and greater battles in accordance with the needs of the development of the actual struggle.