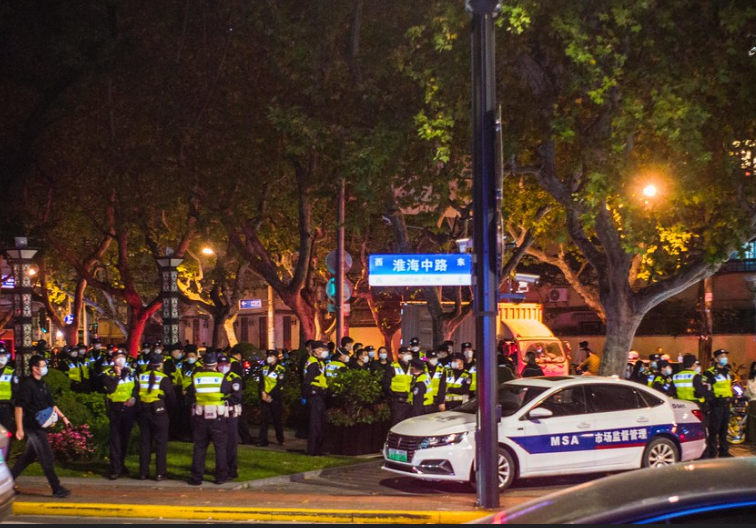 (On December 1, we posted our translation of a contribution sent to us by Chinese comrades. We  are now posting an update, dated November 30, which particularly identifies the role of opportunism within the current mass movements, and the reliance of such opportunism on US-led imperialism. This is our translation, and we have not been able to check with our Chinese friends on its accuracy. However, we are confident that it captures our correspondents' meaning. We have added two explanatory notes - Eds.)

November 30. We note the increasingly liberal nature of the movement as the nature of a mere student protest movement, which degenerated to a rudimentary stage. But with the death of Jiang Zemin, it seems to have given these remaining liberal dreamers a chance to redevelop their own movement, and they began to discuss solemnly whether to take advantage of Jiang's death to call on other classes to join their liberal movement for their own purposes by commemorating him. The speculative nature of the liberals is clear to us today, as Jiang Zemin, one of the key political figures in the suppression of the student movement and the suppression of the liberals in the June 4 Incident, is enjoying the tributes of the liberal activists today. Although the Communist Party's "Letter to the Whole Party, the Whole Army and the Whole Nation" promulgated today contains passages specifically and loudly emphasising Jiang Zemin's credit for the suppression of the June 4 incident to prevent the liberals from taking advantage of it, the rulers wrote: "When serious political turmoil occurred in our country in the spring and summer of 1989, Comrade Jiang Zemin embraced and implemented the Party's Central Committee's decision to flagrantly oppose unrest, defend the correct decision of the Party Central Committee to oppose unrest, defend the socialist state power and safeguard the interests of the people, rely closely on the Party members, cadres and the masses, and vigorously maintain stability in Shanghai." But this does not prevent the liberals from once again using the slogan "those who deserve to die are not dead, those who should not die are dead", trying to continue to use similar tactics as they did in '89 to take advantage of Hu Yaobang's death in the present (1) , without any progress! The use of such a hot face on a cold ass (2) , trying by all means to use Jiang Zemin's death for their own political purposes, has instead helped the rulers to hoodwink the masses into mourning the death of Jiang Zemin.

Who is Jiang Zemin? The man who greatly defended the reform and opening up and promoted the development of Chinese capitalism, the man who single-handedly wiped out what remained of the social welfare of the Chinese working class and promoted the great layoffs. At least 30 million workers were laid off and 70 million total unemployed were created. The man who defended the high agricultural taxes that drove the bourgeoisification of the countryside and created mass peasant poverty, even as large numbers of peasants had to participate in the plasma economy to sell their blood for a living. The liberals want to exploit this? Want to keep the proletariat deluded to honour their class enemies while at the same time helping these liberal fantasists to realise their own beautiful dreams?

Jiang Zemin should be condemned. In this case, it is better for the proletariat to remain politically aloof even now than to join the coalition of rulers and opportunists in honouring Jiang Zemin.

We can also see that due to the blockade of communication in the country, the liberals went over the wall to the extranet and typed out their demand for constitutionalism in China and to turn China into a bourgeois democratic republic, which immediately led to a whole bunch of liberals following the trend and making voices and comments that they wanted to run. Is turning China into a constitutional state, a state ruled by the Guomindang, for the betterment of the liberals? What do they take the working people of China for?

Ah, the general democratic voice of the world is in solidarity with us, but mainly with our liberals. This means that our liberals are inextricably linked to the opportunist reformist ideology within foreign imperialist countries, and this is their international ally. There is no doubt that liberalism is the most serious opportunism in our contemporary society, a threatening line second only to “socialism with Chinese characteristics” as the main enemy. The political interests of the liberals demand that they necessarily bind themselves to a more radical political line of betrayal of China and of the proletariat, leading China to a condition even more miserable than the present rule of the bureaucratic bourgeoisie. They can only rely on the international allies of the bourgeoisie if they are to overcome the rule of the now unprecedentedly powerful bureaucratic bourgeoisie in China. We must call for a break from such a line and come to the line of socialist revolution.

Lenin said in Imperialism: The Highest Stage of Capitalism: "In fact, the particularly rapid and particularly nasty development of opportunism does not guarantee a consolidated victory for opportunism, just as the rapid development of an abscess on a healthy body only hastens the festering of the abscess and restores the body to health." The essence of liberals is also a kind of opportunism, and the earlier they are in the early stage of the movement, the more they can bluff and deceive the masses. But the possibility of not being able to overcome them is not allowed, and overcoming them will help the minds of all of us oppressed to grow.

Our people must recognise their hypocrisy for what it is. We good students must abandon this reactionary ideology and resolutely break with the degenerate and opportunistic elements! Break with the erroneous liberal line and all other lines! We must firmly come to the revolutionary Marxist-Leninist-Maoist line. We need to embrace and assist the working class like those in Foxconn in Zhengzhou, and also go and integrate with the feudalised working masses. Instead of degenerating into the ranks of the liberals and their foreign imperialist allies, we must resolutely raise the red flag!

(1)  Hu Yaobang was a noted liberal within the Party’s leadership, the Secretary-General of the Party and an ally of capitalist-roader Deng Xiaoping. His death on April 15, 1989 precipitated the student movement that led to the June 4th Incident.
(2)  It means that they have been flattering and pleasing others, but others ignore them; the face is enthusiastic, the ass is cold refers to these two different types of behaviour.