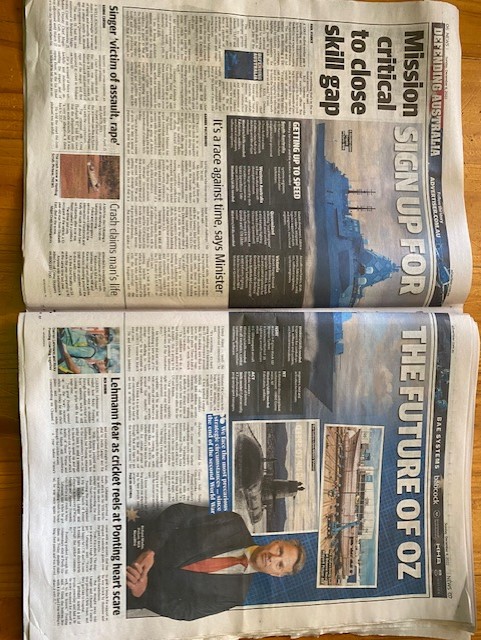 Most of the jobs required to provide the skills needed are specialised trade and engineer level positions, including combat system engineers. Non-trade level jobs required will be in low paid support services such as grounds maintenance, catering and some white-collar jobs in federal government offices in Canberra.

Australian people realize that a responsible government will ensure that Australia can defend its coastline and the people who live in Australia.

The problem is that most of the build-up and focus on defence industry is not for ensuring defence of coastline or people who live here.

In the article in the Sunday Mail, there is an interview with Richard Marles, the Defence Minister. He makes it perfectly clear that it is a "race against time" in establishing an entirely new industry to support the top secret and "extremely complex nuclear technology provided by the US under the AUKUS security pact".

The cry for Australian young workers to pursue a career path in the defence industry is not to contribute to the defence of Australia, but to provide the workforce to enable the federal government to do what it is told to do by the US and UK corporate interests who benefit from AUKUS.

The article in the Sunday Mail names some of these corporations. They are all US or UK multinationals. BAE Systems feature prominently as does Babcock, KHA , Raytheon and Boeing. There are many more multinationals involved, making specialized parts or systems needed to operate the AUKUS war machine. All of these developments will drain the public purse and leave less money to be directed at health, housing, education and renewable energy.

The organised working class is developing its opposition to the AUKUS Alliance. The following resolution was passed unanimously at the recent CFMMEU National Conference:

The secretive plan could cost as much as $170 billion and continues to escalate conflict with China and throughout our region.

We support workers across the world opposing war and excessive military spending and pledge ongoing opposition to further expansion of the nuclear industry.

Unfortunately, the Albanese Government is into AUKUS and the US-Australia Alliance no less than previous governments since Whitlam at least ended Australian involvement in the US imperialist war in Vietnam. Albanese and Penny Wong are both from the "Left" faction of the ALP while Marles is from the "Right" faction. However, they all sing off the same song sheet in subservience to AUKUS and the US-Australia Alliance.

Is this "the Future of Oz" that is in the best interests of the current and future generations of Australian people?